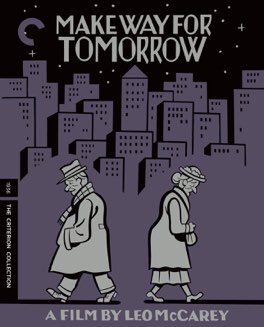 A truly heartbreaking film, but also one that’s surprisingly sweet. It left me with a sort of wistful feeling, sad and yet strangely hopeful, all at once.

I’m once again writing about a film for a blogathon, this time for the Criterion Blogathon. It’s a huge event, lasting six days, and with over 180 individual entries. It’s being hosted by three bloggers, Aaron from one of my fellow Criterion-centric blogs Criterion Blues, Kristina from Speakeasy, and Ruth from Silver Screenings. The topic was simple; write about any Criterion film you want, or any Criterion related topic. I chose this film.

What responsibility do children have, to take care of their parents in their old age? At first it may seem straightforward, after all those same parents took care of their children when they were young and in need. Still, it often plays out far more complicatedly than that, and often for exactly the reasons this film demonstrates. Lives are interrupted, hard choices are made, and it ends up being a much more difficult question than I think anyone is comfortable with. It’s also a question I’ve been thinking about for quite a long time, at least since my grandfather came to live with my family. I got to see the dilemma that’s presented in this film play out then, with people I know and love, and watched as both sides struggled to define their relationship with each other.

The film tells the story of an elderly couple, Barkley and Lucy Cooper. As it begins their home is about to be repossessed. The Coopers have five adult children, and so therefore should have every chance of being well taken care of. Unfortunately, their children are either unable, or unwilling, to provide for them in a reasonable manner. They do hatch something of a plan though, which is that their parents will temporarily split up and move to different children’s houses, while the richest amongst them convinces her husband to take them both in permanently. Immediately, however, both parents and children find that this new relationship is fraught with difficulty, and a lack of understanding. At the same time, as the possibility of a permanent place together begins to vanish, they’re forced to deal with the hopelessness of their situation.

If it sounds like a depressing film, that’s because it is. But it isn’t depressing for maudlin purposes, it’s just an honest portrayal of the situation this unfortunate couple are stuck with. This is the hand they’ve been dealt, and they have no real choice other than to face the harshness of their reality with whatever dignity they can find in themselves. The film does a phenomenal job of showing both sides of the situation; the reality is that it’s just as hard for this couple, married for fifty years, to separate and rely on their children, as it is for their children to take care of them. Both sides are presented as making things harder and easier, and neither looks anything like perfect. It’s reality, and the conflict is something I can absolutely relate to.

As I mentioned when discussing It Happened One Night, my grandfather was a phenomenally stubborn and difficult man. He came to live with my parents when he could no longer manage his own affairs, but he wasn’t willing to accept that fact, and I know it made their lives harder. I watched them struggle with him often, but I mostly did it with the eyes of a grandchild who thought his grandfather was being treated unfairly. I’ve grown quite a bit since then, and I’ve come to have a much better understanding of how difficult it must have been for my parents, how much they were sacrificing as well. This film does an excellent job of showcasing both sides of that issue. The children sometimes come off as terrible, and to some extent they are, but they are also trying to do their best in a complicated situation.

My parents are extremely well prepared for their own future. Certainly they are not likely to experience anything like what the Coopers deal with in this film. Unexpected chance is always possible, of course, but they’ve been lucky enough, and capable enough, to do everything they could to protect themselves. Baring some horrible unforeseen calamity, they will never be in a financially desperate situation, forced to abandon their home. Having said that though, this film is only tangentially about finances. It’s mostly about the difficulty in the various generations coming together, and that’s something that we will absolutely be dealing with in the days ahead. After all, no one’s able to take care of themselves forever.

I hope that when I’m in the situation they were in with my grandparents, that I do at least as well as they did. I love them dearly, but we do have our issues. I get annoyed with them, like any child does, and they get annoyed with me too. If they ever need a place to live, and someone to look after them, I hope I can summon the patience and resilience that they showed in taking care of my grandfather. It’s funny, at the time I swore to myself that I wouldn’t do things like they did, convinced that they had not shown him the kindness and attention he deserved. In hindsight though, and with the benefit of hopefully some more maturity, I think they did the best job they could have done, and certainly much better than the children of this film. - Nov 16th, 2015