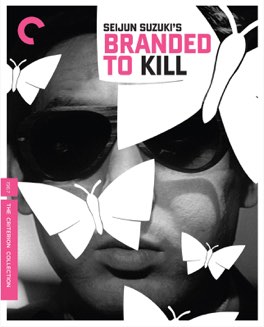 A visually arresting and compelling film, one that made me rethink my opinion of its director’s entire body of work.

I’m not sure I understood the work of director Seijun Suzuki before re-watching this film. I was previously too wrapped up in the idea that he made “incomprehensible” films, which was the charge that Nikkatsu leveled at him when they fired him, shortly after making this film. I let their opinion of him color mine, and that’s something of a shame. Watching this film again now, perhaps with more mature eyes, I experienced it completely differently. Instead of focusing on the story, and any shortcomings I might find there, I saw the beauty and genius in what he was trying to accomplish.

Apparently, this film was created to fill a hole in the production schedule, and so the script was put together a least partially by Suzuki himself. The film follows the Yakuza’s number three assassin Goro Hanada, as he goes about his business of killing people. He’s hired for a variety of jobs in the film, which ultimately lead to his accidentally killing an innocent bystander. In the mob world, killing the wrong person is punishable by death, something Hanada knows all too well. The rest of the film follows his attempts to escape from his fate, as well as his relationship with a young woman he meets who longs to die.

The story is really pretty great, if a bit cobbled together. Hanada makes for a rather odd character, partially because of his addiction to sniffing boiling rice, and partially because the actor who played him, Joe Shishido, had gotten surgery that made his cheeks resemble a chipmunk. The other characters are mostly B-movie gangster staples, but the young lady that Hanada ultimately becomes obsessed with is something different. Her desire to die, and the darkness in which she expresses it, makes for a disturbing character, and a completely different element than the rest of the film.

But the main thing that I found this time was a new appreciation for the way that Suzuki took this story and created a visual feast with it. The story wasn’t bad by any means, but it also wasn’t high art. Suzuki took what he had, and he created something startlingly unique with it. This film manages to be both beautiful and haunting, often at the very same time. It manages to perfectly straddle the divide between absurdly silly and deadly serious. That Suzuki was able to take the sometimes mediocre material he was being given and create true art is an unbelievable achievement.

One of my favorite segments in the film is an early love scene between Hanada and his wife. The entire thing is incredibly well done, but I especially liked the way it kept jumping back to the couples empty and perfectly made up bed, between shots of them enjoying each other in virtually every other part of their house. It’s a brilliant way to convey what’s happening, without explicitly explaining everything. There were a ton of moments like that in this film, moments where the visuals made it unnecessary to spell everything out. It’s a gamble, and sometimes a little confusing on first watching, but it pays off brilliantly. It’s what allows the film to transcend its genre trappings. - Sep 3rd, 2015