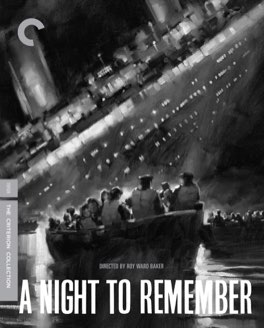 A Night to Remember

An incredibly beautiful and moving film, full of phenomenal acting and cinematography. It perfectly tells the story of one of histories most iconic tragedies.

I have always been obsessed with learning about history. It was my favorite subject in school, and I remain completely enamored to this day.

I was, therefore, prepared to greatly enjoy this film, especially once I read that it was the most accurate telling of the sinking of the Titanic ever made. What I got was far more than I’d expected though, this film is an absolute masterpiece of thoughtful recreation and examination.

The filmmakers pulled out the most interesting details from what happened, and created an unbelievably compelling narrative. Even though we already know the ultimate ending, watching everything actually play out was fascinating.

The story is based on the first serious book written about the tragedy, which is still considered a definitive source today. The author, Walter Lord, interviewed survivors in an attempt to piece together exactly what happened. The film draws from his book, combining characters and mining stories in a sort of ensemble fashion.

We start with the christening of the ship herself, and then follow her second officer as he heads to meet her for her launch in Belfast. The first part of the film also shows us various other people who will be traveling on the ship, from the very rich in first class, to the steerage passengers simply looking for a better life in the United States.

After the ship departs, the film follows the sequence of events that lead to its eventual sinking, and to the death of the majority of those aboard. The film does a phenomenal job of moving between the different people involved, as well as showing how the different classes were treated.

We see a ton of fascinating vignettes taken from the book. A group of men playing cards with an obvious hustler, until well past the point of no return. A drunk crewmember who had smuggled alchohol on board, continually going back to his bottle until his room was underwater. The musicians hired to play on the trip, who decide to continue providing music, even as the boat is sinking. And many other incredible stories.

It’s so great to have these various scenes play out, and the film does a great job of not dwelling on any particular group for too long.

There’s something so timeless about the tragedy of the Titanic. It resonates with me today as a sort of harbinger of what happens when we think we’re more advanced than we actually are, and when we think we’ve conquered nature. It’s something about the hubris of people actually believing that the ship “could not sink,” that it was literally impossible.

There’s a moment when the Titanic is frantically making S.O.S. calls using morse code, and another ship’s first mate almost ignores the warning because he doesn’t believe it could possibly be “the Titanic.”

There is a strong sense present in the people on the ship that now we were free to do what we wanted with no threat from nature, or from circumstance. It makes me wonder what the things are that we’re equally as wrong about today, what allusions that we haven’t had punctured, simply by chance. I’ve read that had six or seven different things not gone wrong for the Titanic they would have been fine, or at least had the majority of the passengers survive.

There’s an extremely telling moment near the end of the film where the first mate says that he can’t believe how sure he was of the Titanic, and that he doesn’t think he’ll ever be that sure of anything again.

In a weird sort of way this film lines up a little bit with the previous film I watched, Hearts and Minds. That film was a documentary, and about Vietnam, but it also made me think about Watergate, which is another instance in which a huge group of people realized the lack of infallibility in a system they had complete trust in.

In that case it was in the honesty of their government, in this case it was in the power of the technology they had wrought. There was a real sense in Edwardian England that we had finally achieved mastery of our surroundings, and the sinking of the Titanic proved fairly concretely that it just wasn’t true.

The film itself is also a work of true beauty and grace. It’s full of the most incredible black and white photography, showcasing both the elegance of the ship, and the horror of her sinking. It’s a stark film, one without the huge budget of later revivals of this story, but with so much more to recommend it.

There’s just absolutely no melodrama or sentimentality to this film, the events play out exactly as they supposedly happened. The acting is uniformly wonderful, these characters jump off as real and believable people. This is especially true in the film’s portrayal of the really horrible ultra-rich, and really rowdy ultra-poor, that inhabit the ship.

There were some moments where I could not believe what was happening, even though I knew it was probably real. I wanted to yell at various people to be better about helping each other, to not be so convinced of their might, or to not let half empty life boats away from the ship.

There’s one moment where a snootily rich noblewoman doesn’t want to go back for survivors because she’s feeling crowded on her mostly empty life boat. It’s a story I can 100% believe and it just made me so mad. This film represents a different age, where first and second class have to be evacuated before anyone from steerage can be saved.