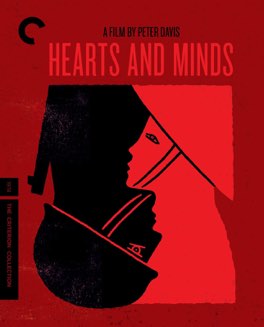 One of the most powerful films on the subject of war and American overreach that I’ve ever seen. The film showcases what happens when this country decides it can play god around the world, with predictably disastrous results. This should be required viewing for everyone who lives here.

I knew going in to this film, which won for best documentary at the 1975 Academy Awards, that it would be heavy. The subject matter is far too serious for it not to be, and any documentary made entirely of footage from Vietnam, or of people actually involved, was going to be heavy. But I was still somehow unprepared for what I saw in this film. For the sheer horror of the footage that I saw; of tons of bombs being dropped on villages, of people being brutally beaten and shot, of the casual racism and indifference of the American soldiers. I was unprepared for the shame I would feel watching it, at the fact that my country was responsible for this destruction.

All nations have sins and Vietnam is clearly one of ours. It was a doomed war from the start, a conflict we couldn’t win and shouldn’t even have been participating in. As one of the people in the documentary says, we weren’t on the wrong side, we we’re the wrong side. This was the United States of America knowingly getting involved against a revolutionary independence movement, simply because we didn’t like the politics of the people in charge. An independence movement we tried to fight as outsiders, with our only allies being those hungry or broke enough to fight at our side. It was a crime, and the responses that were generated in this country as it’s criminality became known were some of the finest moments in American history.

The documentary is made up of found footage taken in Vietnam during the war, mixed with footage taken back in America of former soldiers, commanders, and political leaders. One of the most impressive things about this film is the access the filmmakers somehow had to the various people who were interviewed, including some very senior members of the United States and Vietnam governments. I just can’t imagine that you could get access to these types of people today, and their interviews are incredibly illuminating as to the way that power structures play out in this country.

Those interviews are fascinating mostly as a snapshot into the nature of power, but I think the interviews with the former soldiers are far more enlightening. Two stick out in my mind specifically, one guy who lost the use of his legs and said that the saddest thing for him about the war was that it killed his pride in being an American. And the other, a man who cried at the knowledge of what he had once taken pride in doing, that of flying the planes that were dropping the bombs and other tools of war on Vietnam. To watch these guys acknowledge their pain in what they had done, to have had their minds so insanely shaped by their experiences, was absolutely riveting.

The most interesting and important thing about this film though, was that it could even be made at all. The Vietnam war came at a very specific moment in history, that is to say at the birth of the modern mass media. The first televised presidential debates were the Nixon/Kennedy debates in 1960, and the politicians in this country didn’t yet understand the vast power of media. The nightly news during the Vietnam war had shots of the coffins of dead soldiers, being brought back from the battlefields. The news showed the protest marches as they were happening, without editing them to make the participants seem crazy, or childish. The war could be seen, and heard, and understood, by people who were half a world a way and uninvolved. And all of it led them to get involved, and that led to the biggest protest movement this country has ever seen.

My fear is that it’s just not possible for that to happen anymore. The Iraq war was most emphatically not televised. I mean we got some footage of rah rah patriotism, but not the kind of raw glimpse into what was going on that you see in this documentary. The soldier’s bodies are brought back in the middle of the night now, and the media isn’t allowed anywhere near them. The average American citizen just has so little connection to what’s going on with our military in other parts of the world, that it doesn’t allow them to understand the horrors of what’s happening, or decide to take action to try and stop them.

A movie opened recently, American Sniper, and admittedly I haven’t seen it yet. But I have seen the response to it, which is tweets where the authors say the film makes them want to go out and kill Arabs. There is a dangerous amount of nationalism going on right now in this country, and it scares the crap out of me. I am a patriot, I love this country, but the difference between patriotism and nationalism is that a patriot doesn’t think their country is perfect, they love it with full understanding of its flaws, and want to work to make it better.

I want to help America better represent its ideal being, the beacon of freedom it’s intended to be. Nationalists think that anything this country does is right, and that we’re somehow inherently better than other countries. That’s the same logic that has led to war in every part of the world. When I see ads on television for our armed forces, when I see how the rest of the world is starting to view us again, it makes me very nervous. This country is at our absolute best when we’re leading a free and open world, and at our worst when our hubris convinces us that might makes right, and that we can do no wrong. This film should be taught in schools here, because we are very clearly in danger of forgetting, and therefore repeating, our past. - Jan 22nd, 2015