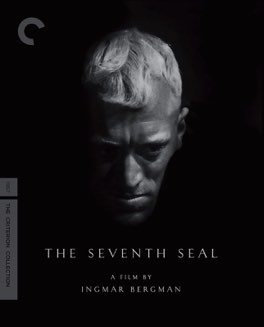 This is a remarkable film. An incredibly work of cinema, deep and beautiful, powerful and funny, charming and thought-provoking.

It’s a wonderfully made film, with incredible performances, story, and music. But, ultimately, what sets this film apart are two things. First is the absolutely spectacular cinematography, so many unbelievably great shots that have been imitated, evoked, and paid homage to. The second is the story, with it’s deep contradictions and simple unanswered questions. It is a true masterpiece.

The first time I saw it I was eighteen, and not at all prepared for it. I didn’t understand it then, but something compelled me to seek it out when I was a bit older. I’m glad I did.

The story is complex, but at its heart it’s about one man’s quest for knowledge and understanding. That man, knight crusader Antonius Block, played marvelously by Max von Sydow, has recently returned to his native Sweden after ten years fighting in the Crusades.

He returns to a land ravaged by the Black Death, which is causing everyone to lose their collective minds. As they say, death walks the land, but, in this case, it’s literally true. Death is a central character here, played by the wonderful Bengt Ekerot. He is everywhere; posing as a priest, chopping down a tree, and generally making his presence known at every turn.

He comes to Block on a beach and Block challenges him to a game of chess. As long as the chess game continues Block lives. If he wins he gets to keep his life, if he loses he dies.

Why does Block want to live a little bit longer so badly? Is it because he has some unfinished business, or is he merely afraid of death? No. He wants to live because he craves knowledge about God. After spending the last ten years of his life fighting a pointless Crusade, he wants to know what it was all about. He craves some validation that the God he just spent the majority of his life fighting for is actually real, and actually cares.

This quest for knowledge leads him to some rather interesting choices, including, at one point, asking a young girl who is about to burned at the stake for consorting with the devil to tell him if the charges against her are true. He says he wants to meet Satan, to ask him what he knows of God. He figures if anyone knows God, Satan does.

She says the charges are true, that she is constantly with the devil, but when he looks in her eyes all he sees is fear and suffering.

The film has been parodied endlessly. And, it’s true, the premise is ridiculous. But, the story itself is wonderful. There are so many little moments here; from Block’s squire giving love advice to a smith whose wife has run away, to the early scenes with the actors, which at the time seem utterly pointless, but end up being central to the story.

This is a dark film, despite its surprising moments of real humor. But the ending is a strangely hopeful one. This film, so mired in death, and longing, and unanswered questions, ultimately celebrates life in a weird way.

It’s a very touching ending, and it validates all the darkness that comes before it. - Apr 10th, 2014