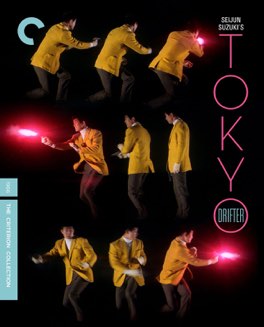 Another crazy Suzuki film, only this time it’s in color. Full of all of the creative and pointless cinematography that make his films totally worth watching.

Oh Seijun Suzuki, my favorite Japanese Surrealist B-feature director, it’s so nice to see you again. Those of you who read my review of Fighting Elegy, know that he was fired from his contract role at Nikkatsu for making “incomprehensible” films, despite being a profitable director who got some critical attention. This film, compared to that one, actually makes sense for the most part. There are, of course, incredible gaps in the storyline where it’s difficult to figure out what the hell is going on. There is also, however, Suzuki’s trademark unique cinematography and attention to the smallest details of the scenes he puts together. All in all, this is a great film for what it is, a minor gangster picture with some serious style. It’s a fun film to watch, even if it doesn’t really surprise in the slightest.

As I said, for a Suzuki film, the story here is reasonably coherent. Nikkatsu had ordered him to “play it straight”, and it would appear that he mostly listened to them. The film revolves around Tetsu, an overly loyal and honor obsessed, hired gun for reformed Yakuza boss Kurata. Kurata has recently disbanded his syndicate and is living off his ownership of a building in Tokyo that bears his name. He owes a loan on the building, and the timing of it’s repayment gives rival-Yakuza boss Otsuka an opportunity to strike. He orchestrates a scheme to take the building from Kurata, one that is partially successful, however two people end up dead with blood on everyone’s hands. Tetsu becomes Otsuka’s biggest issue and, in an attempt to help his boss Kurata, leaves town to become a drifter. Almost immediately, however, he is waylaid by seemingly every Yakuza in Japan, sent after him by Otsuka. Eventually he runs into Shooting Star, a former Otsuka henchman who has become a kind of Rōnin, much to the dismay of Tetsu who “hates ungrateful men.” Meanwhile, back in Tokyo, Otsuka has also decided to take Tetsu’s woman, a nightclub singer named Chiharu. Tetsu proves extremely hard to get rid of, however, and so Otsuka orchestrates events so that Tetsu is finally forced to return to Tokyo to settle things once and for all.

The story is straight forward, and honestly pretty stupid. What makes this a really cool film to watch is all the interesting things Suzuki does with it. The cinematography is predictably insane and brilliant. There are so many beautiful scenes here, true they mostly distract from any understanding of what’s happening in the narrative but, given that the story is stupid anyway, I don’t care at all. I don’t watch Suzuki films for their plot anyway, and this is definitely no exception. The story jumps around and leaves a ton of random gaps but what we get instead is pure crazy invention. This is the only Suzuki film I’ve seen in color and he really makes the most of it. There is a shot near the end where the colors he uses changes as the scenes goes along, it makes absolutely no real-world sense but man is it awesome to see. Suzuki also didn’t really care much about acting, he uses pop star Tetsuya Watari as Testu, a man who apparently had to be prodded just to recite his lines at all. But, somehow, he brings the exact right amount of sullen loneliness and pride to his character. The rest of the cast is fairly forgettable, but it doesn’t matter, the cinematography is the real star here.

I absolutely understand why his studio fired Suzuki. He was, by all accounts, insubordinate to the extreme. He was hired to make mediocre films on a budget, just good enough to play before the main feature. Instead, he made masterpieces of surrealism, guaranteed to be completely incoherent and yet totally worth watching. His best films, which in my opinion definitely includes this one, are works of pure imagination. The shots seem to come bursting out of his brain, each one more absurd than the last. I continue to love his penchant for taking completely non-dramatic moments and imbuing them with meaning by using the most wacky and pointless camera angles I’ve ever seen. I’ve never experienced a director like Suzuki, before or since, and that’s ok, one is more than enough. Still, I’m glad we got at least one, one guy taking the crap the studio was spoonfeeding him and turning into something this insane and fun. Everyone should watch at least one of these films at some point in their life, if only to see how much more interesting the stupidest Hollywood crap could be, if it was in the hands of a real artist. - Jul 6th, 2014