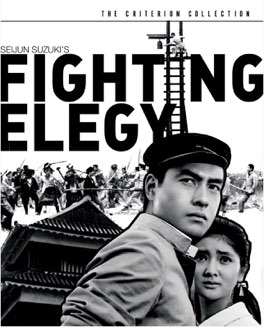 A confusing film, full of insane moments and a hard to follow plot. Still, definitely enjoyable, and beautifully filmed.

This film makes absolutely no sense at all. That’s not to say it’s a bad, or even an unusual entry in the filmography of its director, Seijun Suzuki. None of his movies make any sense, he was eventually fired from his contract role at Nikkatsu for making “incomprehensible films.” The difference here, I suppose, is that this film seems like it wants to make sense. In most of Suzuki’s films that I’ve seen, like Tokyo Drifter or Branded to Kill, he’s merely doing his best with whatever mediocre genre script he was unfortunate enough to be given. Here, however, it feels like he really tried to make his own film, a serious film. And while he mostly failed, it’s still a fun film to watch.

The story, which is quite incomprehensible, his studio wasn’t wrong about that when they fired him, is convoluted. But, as far as I can tell, it’s about the nature of Japanese fascism in the 1930’s. Our hero, Kiroku, is a middle school student who is in love with the daughter of the family he lives with and addicted to violence. He’s Catholic and feels very conflicted about his lustful feelings for her, but unwilling to masturbate he turns to violence in order to quench his lust. This, inevitably, leads to quite a few run-ins with authority figures, although they are mostly permissive of his behavior. Eventually he is forced to flee the town he lives in and head to the country to live with his Uncle, but, even there, his pattern of violence and anger follows him.

The cinematography is Suzuki’s usual mixture of beautiful and slightly odd. He loves complex camera angles for otherwise non-dramatic moments, and there’s plenty of those here. There are also some truly wonderful scenes. There’s a scene of falling snow that stands out to me as an exceptionally beautiful shot. This film, owing to budget, is in black and white, so we don’t get some of the weird color choices of some of his films, but the starkness matches up well with the plot. The acting is surprisingly good for a low-budget feature, even when the story makes basically no sense.

I’m not familiar enough with Japan of the 1930’s to understand everything that’s being examined here. I don’t know, for instance, if the life of a typical middle school student of that period was as insane as it’s being portrayed. I certainly hope not! But, the themes here, that of violence, and of what it means to be a man, and what the correct attitudes for life are, are fairly universal. If you can see through all the weirdness of the story there is real value here. Suzuki definitely doesn’t accomplish what he was attempting, but he did create an interesting and chaotic movie, one that I’m glad I got to see. - Apr 9th, 2014