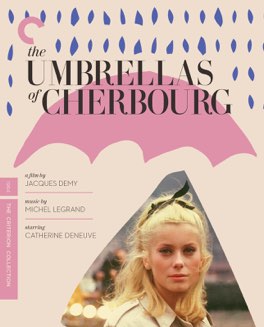 The Umbrellas of Cherbourg

A stunning and lovely film that I enjoyed immensely from beginning to end. So inventive and beautiful, so completely full of both melancholy and joy. It was basically perfect.

Oh my, what an absolutely wonderful, almost unbelievably great film. So happy and full of life, and yet so melancholy and reflective.

Like I said during my review of Lola, there is a strong Amélie quality about the films in this informal trilogy by Jacques Demy. These films, and this one in particular, take place not in the world as it is, but in the world as we wish it was. Specifically in a world of beautiful color that’s just slightly more magically lit than the real world.

This film, unlike Lola, is also entirely sung, like an opera. It adds an incredibly ethereal quality to everything, as though the entire endeavor were floating a few inches off the ground. It’s a wonderful, wonderful thing to see.

As I said, this film follows Lola in an informal “romantic trilogy” of films, that share the some of the same characters. In the case of this film it’s the character of Roland Cassard, played once again by Marc Michel, who shows up as a jeweler and plays a fairly major role in the story.

We start, however, with Guy Foucher, a twenty year old auto mechanic who is getting off work, excited to see his girlfriend and go to the theatre. His girlfriend is the daughter of the proprietress of an umbrella shop and he picks her up for their date out front. Her name is Geneviève, she’s seventeen, and she’s played by the absolutely stunning Catherine Deneuve.

Guy and Geneviève are hopelessly in love, of course, and have decided to get married, open up a gas station, and have a daughter. There’s just one problem, Guy hasn’t done his military service yet, and with a war on in Algeria it’s fairly certain he’ll be sent to fight.

Sure enough, he’s soon called up for duty and leaves Cherbourg for at least two years. Although Geneviève swears she’ll wait for him, her mother would rather she ended up with Roland Cassard, who is now a jeweler, who met the family when they were in dire financial need, helped them out, and, eventually, asked for her hand in marriage.

The rest of the film follows what happens with Geneviève and Roland, and, eventually, with what happens when Guy comes back from his military service.

I have never seen a musical like this one before, and I love musicals. There are almost no songs in any traditional sense in this film, instead the entire thing is sung. Every interaction between every character is musical, and it really makes the entire film seem dreamlike.

It’s an almost hypnotic effect, I can still hear the melody of the main theme in my head as I’m writing this now. It adds a completely different dimension to the story, one that I never expected but that I absolutely loved. It also changed the nature of the dialogue in interesting ways, no one in this film goes on for long, there is a really nice give and take when any two characters are on screen together.

It creates a sparseness of communication which works really well for the story.

I love sad stories and sad songs. I especially love them when they are presented in the form of something happy. This film has that effect to perfection. The entire film is beautiful, full of life and color and incredible things to see. The characters are literally singing, even the slightest dialogue is recited in full song. And this is, at times, a very happy film full of very happy people.

But, there is also some serious melancholy here, and it’s just so wonderfully presented. This film made me feel like sitting in a warm alcove, on a blustery and rainy day, with a nice cup of tea, reading a book and listening to the rain pound down outside.

It’s a lovely feeling, the weather outside contrasting perfectly with the warmth inside. The opening shot of the film, with umbrellas walking around in brilliant choreography on a rainy Cherbourg day, made me want to pack my bags and immediately move back to France.

There’s just something so magical about young love and melancholy in the rain. That feeling of absolute hopeless love and fear all mixed together. This is a film about that love, certainly, but it’s about a lot more than that too. The early part of the film, before Guy leaves for the war, gives way to the next part, and that’s the realization that young love is wonderful and beautiful, but rarely goes quite the way we might have planned.

This is why I described the film as melancholy, as opposed to sad. There is a pensive quality to everything that happens on screen, and a recognition that the end of young love might be traumatic, but that it leads to much greater things.

Almost everyone can remember the feeling of that first love, and it felt so deep at the time, but very few of us ended up with that person. And there are a million reasons for that; time, growth, fate, luck, whatever. But, for those of us who aren’t miserable where we ended up, it’s mostly a nice memory rather than any kind of lasting sadness.

This film reminded me of both the joy of first love and also the much greater joy of what comes after. I absolutely loved it, and I think this will become one of my favorite films to watch again and again. - Nov 24th, 2014