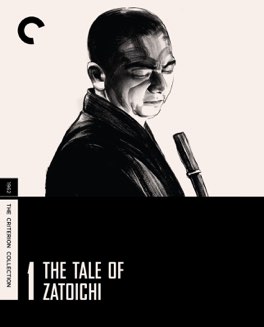 A surprisingly affecting film, one that rises far above its pedestrian intentions to become something special. I can’t think of a better way to start a series like this than with a film of this quality.

The Tale of Zatoichi

As the first entry in the longest running Samurai series in Japanese history, 25 movies from 1962-1973, I wasn’t sure what to expect from this one. Certainly I expected a genre film; much like the James Bond series is to the west, I expect this to be a mostly fun and fluffy adventure. And it certainly was, but it was a whole lot more as well. This was a startlingly humane film, full of warmth and a wonderful message about the futility of violence and war. It was wonderfully acted and beautifully filmed, but really it was the message that struck me. I don’t know where the series goes from here, it’s extremely apparent from the ending of this one that Daiei Film didn’t anticipate that they would have an enduring hit on their hands. I don’t know where the series will go, but I’m really looking forward to finding out.

For this first installment, we are mostly given an introduction to our main character, the blind swordsman Zatoichi. He is a former masseuse turned Yakuza warrior, and clearly already has something of a reputation as a man of uncommon skill with his blade. Still, at least at the beginning of the film, he seems to be treated more as a curiosity than a legitimate warrior. It’s also immediately apparent that he has some reservations about the life he has led, he seeks peaceful solutions to his problems and wants to help people anytime he can. In fact, the only people he really takes advantage of are the stupid petty gangsters he’s surrounded by, and then only after they openly attempt to profit from his blindness. He is, essentially, absurdly gifted with his blade, but racked with guilt and torment for the life he has led up to this point. Wandering into Iioka, supposedly at the behest of the local Yakuza boss, he seems to simply want to drink and relax. Unfortunately for Zatoichi, things aren’t exactly what they seem. Iioka is involved in a turf war with a rival gang, and this rival has hired a Ronin, a disgraced Samurai from Edo. Over the course of the film Zatoichi and this Ronin, Hirate, get to know each other and become friends. There’s also a subplot involving one of the Iioka men, a woman he got pregnant, and his sister. But the main plot leads directly to the inevitable turf war and the final duel between Zatoichi and Hirate.

It all sounds like pretty standard genre Samurai, and for the most part it is. What sets it apart though, is that humane quality that I alluded to in the opening paragraph. This isn’t a film that glorifies violence, not at all. In fact the main message I got was that violence is ultimately just about the least useful thing anyone can waste their time with. Zatoichi, and to a lesser extent Hirate, would rather do almost anything than kill and fight. They both live by a strict code of honor, and will defend themselves as necessary, but it’s made very clear that they think this whole gang war is pointless and stupid. There is a really poignant moment where, after finding out that a young girl has either committed suicide or been killed in the river that they have been fishing in, Hirate and Zatoichi decide that enough killing has happened and they don’t even want to risk the life of the fish. The rest of the characters in the film are basically window dressing to this friendship between these two great swordsmen. They like each other immediately, bonding over their favorite fishing spot, and have a wonderful conversation over some sake at a local bar. These two men are so alike, and have so much respect for each other, even as they know that their circumstances will almost certainly lead to their dueling at some point. It’s a subtle relationship and it’s perfectly executed.

The whole thing would still be rather silly without the truly phenomenal performance of Shintaro Katsu as Zatoichi. He’s playing what is basically a blind superhero, but he plays the part with such dignity and respect that he really makes you believe in the character. It cannot have been easy to imbue this much personality in what could have so easily been a caricature. From the way he holds himself, through his dialogue, and everything else about his performance, he made me invest in the reality of this tormented man. It was really magnificent. Hirate was also good, although he had less to do and less to work with. Still, he creates a very convincing portrayal of a man who has lost everything, someone who has only his honor left to him. Rather than any of the cardboard characters around them, I think the scenery and the cinematography represent the rest of the cast here. This film is so beautifully shot, and so impeccably paced, it was a definite surprise and a very welcome one. I’m used to films like this being action, action, action, but this film spends most of its running time exploring these people. It’s humane filmmaking, and it’s responsible for my liking this film as much as I did. - Aug 27th, 2014