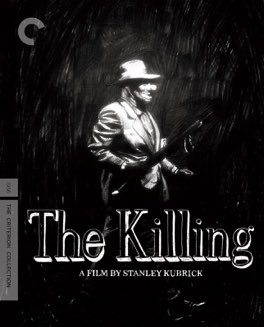 It’s simple really, but so cleverly presented, that it grips you tightly and holds on to the very end.

One god damn poodle. One god damned spoiled poodle owned by a horrible spoiled woman who can’t hold on to her dog for five god damn minutes. That’s all it takes to ruin what was otherwise a perfect scheme. Well, sort of. One poodle, one spoiled woman, one weak husband, one cheating heart, one two-bit thug, and about ten other little things combine to ruin everything, and make this film the incredible work that it is.

The story is a classic one, a gang of people united in pulling that one big heist, that one that will finally make them all truly rich. It’s been done many times before and after, but this is the best version I’ve seen since Jean-Pierre Melville’s classic film Bob le flambeur, which was somehow made the same year. The difference between that film, one of my all-time favorites, and this one is in how tight the plot is here. Minimal character exposition, archetypes performing their roles, and yet it’s nearly as compelling.

I love most of Stanley Kubrick’s movies. He was a phenomenal director, full of interesting stories to tell, and he told them exceptionally well. And this is no different. I hadn’t heard of this film before, the first he made with a professional cast, but I’m glad I did. It’s not a typical Kubrick film, if such a thing exists. It’s a much smaller film than, say, 2001: A Space Odyssey or The Shining, a much simpler film, but excellent nonetheless.

Those movies had the Kubrick style, and other than a rather novel use of voiceover and an interesting out-of-sequence story telling style, this movie is mostly lacking anything that screams of his particular talent. But this movie, which must have been especially shocking in mid-50’s America, is a treasure. The simple and direct narrative makes for a compelling and intricately wound film that explodes scene by scene. Everything is so structured, so methodical, that by the time the heist finally plays out, in full frenetic pace, it’s all the more shocking and intense. - Mar 11th, 2014