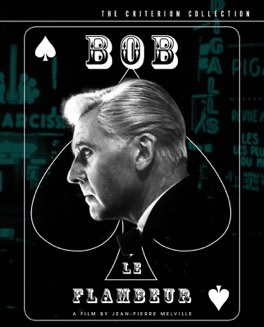 A phenomenally stylish and entertaining film that somehow also manages to investigate addiction without being preachy. Everyone should see this one.

This is a film about addiction. That’s not to say it doesn’t have suspense, thrills, wonderful performances, and a ton of style. It has all those things and more. This film was, without a doubt, one of the inspirations for the original Ocean’s 11, and basically all casino robbery films that came after it. However, unlike those films, instead of focusing solely on the crime that is the climactic element, this film instead chooses to develop compelling characters, and to tell stories that feel very real. There’s friendship, pride, betrayal, love, despair, and honor in these people. It’s a stunning example of how to make a gangster film that’s about more than just cliche and it’s one of my all time favorite films.

Specifically, the addiction that’s being examined here is gambling. Our hero, Bob Montagné, is absolutely addicted to gambling. It’s his sole reason for living, he even has a slot machine in his house that he uses just for relaxation when he gets home in the morning. Bob lives in Montmartre, and was, twenty years earlier, a small time hood. He got nabbed for something or other, the film never says what, spent some time in jail, and he’s been straight ever since. He haunts the neighborhood; gambles, wins some, looses some, and manages to keep his head just above water. After losing almost everything he has left at the casino he decides to rob it, on a night where there will be eight-hundred million francs in the safe. He pulls together a crew and the rest of the film focuses on their attempt.

Ultimately his addiction both dooms and saves him. I won’t give away the ending of what is a fabulously unpredictable story, but addiction factors in heavily throughout. It’s what compels Bob to plan the heist in the first place, after winning a bunch of money on a horse he loses it all when he heads straight to the casino. It’s what defines his character; early in the film he tells someone he’s going to bed and heads straight to a back room poker game instead. It’s a fascinating look at the power something can have over our lives, and it’s made extra compelling thanks to the incredible acting of Robert Duchesne as Bob. He provides the perfect amount of style and coolness, while still keeping his character firmly rooted in his own failures in life. This is my favorite Jean-Pierre Melville film, and I think it’s in large part because it has his most fully developed character in Bob.

What separates this film from the gangster casino heist films that follow it is all the stuff around the main story. The focus on the negative aspects of Bob’s addiction is responsible for a lot of that, but there’s a lot of other things going on as well. There’s an early scene where Bob throws a pimp who beat his woman out of his house, which tells us a lot about his character and makes the film so much richer as a result. The subplot involving the doomed love affair between Bob’s protege Paolo and Anne, a young girl he rescues from the streets, is so great. The friendship between Bob and the police commissioner, the love Yvonne clearly has for Bob, this film is packed with interesting things. The film weaves these seemingly unrelated, almost slice of life elements, into the story. They all eventually play their part in the greater narrative and come together to form a perfect ending. This film is a masterpiece on how to tell an engaging story without resorting to cheap explosions or pointless action sequences. If only they still made films like this one. - May 6th, 2014