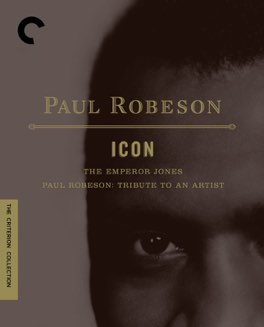 A severely dated film that was hard at times to watch. But, one that showcases the awesome power of Paul Robeson, and one that must have completely confounded the expectations of the ignorant viewers of its time.

Paul Robeson had one of the greatest voices in the history of cinema. Like the bass of James Earl Jones mixed with the gravitas of Morgan Freeman, it is a thing of absolute wonder. Robeson was not only a phenomenal actor, he was the first African-American man to star in a mainstream film, when he stared here in 1933. It’s not an especially amazing film, it’s very rough around the edges, and the story is ridiculous. There are certainly points of interest, but it’s the immense importance it plays in the history of cinema and race relations in this country that captured my attention.

This film is based on a play by Eugene O’Neill, an Irish-American playwright known especially for his ability to write in common vernacular English. He utterly fails to do so here, however, instead creating a fantasy dialect around how he imagined the average African-American spoke at the time. You can see Paul Robeson strain at the insulting absurdity of the dialogue in many scenes, especially given the extremely frequent use of the n-word by basically everyone in the film. Still, this fairly silly story, full of insensitive portrayals in many places, also has quite a few moments that must have been truly shocking to the white establishment of the time.

The story follows Brutus Jones, a newly minted Pullman porter who receives a musical sendoff from his Baptist church, full of their belief that he won’t go wrong in the bigger world. After promising his girlfriend he won’t stray on the road he immediately begins one con after another, most notably stealing the girlfriend of his supposed best friend and mentor. He plays the Pullman thing for as long as he can, most notably conning the president of the United States into involving him in some sort of blackmail scheme, but eventually gets into a fight during a craps game where he kills a man. While serving his time for murder he kills a guard and escapes, only to make his way onto a boat headed for Jamaica as a coal shoveler. Eventually, while passing a remote island inhabited solely by Africans, he jumps ship and the rest of the film follows his adventures among the natives, starting with his working for, and eventually with, a British trader.

The film is fairly shocking by modern standards. It’s full of extremely racist depictions of basic stereotypes about African-American men; that they treat women poorly and can’t refuse sex, that they’re easily corruptible, that they’re greedy and only after money, and that they’re willing to swindle and con their way to power. But, even in the midst of this insanity, this horrible racism and insulting language, Robeson manages to rise completely above the film, and the character he’s playing, and radiate out from the screen. His character, while clearly at some level a “bad” guy, is without a doubt the one I was rooting for the entire film. He comes across as he was; an intelligent, resourceful, and mentally strong person, all things that must have confounded the expectations of the close minded bigots who saw this film when it was released.

There are also a number of scenes that must have been just shocking to the audiences at the time. Robeson had already done several films by this point, but this was his mainstream breakout, and this film was seen by a far wider and more diverse audience. For them to see a scene like there is in the middle of the film, where the African-American Robeson is being served by the older British trader, after Robeson has made him his subservient, a man who is lighting Robeson’s cigarette and taking orders, must have absolutely blown their minds. The film, for all of it’s racist stereotypes, presents us with a strong African-American man who is leading, even if just for a little while. Unlike the usual roles in Hollywood for African-American actors of the time, usually as maids or shoeshine boys, or servants of some kind, this film features a man who is tasting success of his own making.

That might be the most important point on the side of the film as being a little bit revolutionary and ahead of its time. Robeson’s character of Brutus isn’t succeeding because of luck, or because a white man lets him. He’s succeeding because he’s taking what he wants. His methods might be unscrupulous, and even murderous at times, but for audiences to see an African-American man being assertive, must have just been like an atom bomb to their preconceived notions of racial correctness. It’s an amazing thing to see, even if you have to wade through quite a lot of superfluous and hateful nonsense to get to it. I’m really glad to have seen this film, and I’m excited that I get to experience a lot more from this phenomenal actor. - Dec 22nd, 2014