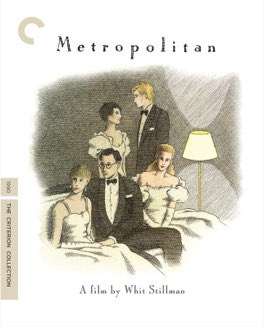 A lovely film about growing up in the moneyed upper class of early 90’s Manhattan. It takes a while to fully form, but once it does it rewards patience with a truly charming film.

It’s full of interesting people, though not entirely with quality acting. Most of the actors here were first timers who have never become well known, and there’s a good reason for that. But that same stilted acting, matched up by even more stilted dialogue, is, as I said, charming.

This is a window into a society which may not exist anymore, if it ever did.

Specifically, that of the “UHB’s”, or Urban haute bourgeoisie, a term coined by one of the characters in the film. It’s the society of old money debutante dances and after parties in Manhattan’s Upper East Side of the late 80’s and early 90’s. Our characters are college kids, home for the holidays, who hang in a pack they’ve dubbed the SFRP, or Sally Fowler Rat Pack, after the member who hosts their ridiculous gatherings.

They dress up, go to formal dances, and then have absurd conversations about the meaning of their class status, or the gossip of their peers. Really, they’re no different than the kids of Dazed and Confused except that they have money. It’s the same life, just viewed through a different window.

The acting here is, as I said, mixed. Most of the cast were unknowns and they aren’t particular notable. This has the wonderful side-effect of making them invisible, they just are their characters. They seem stilted because the characters are stilted, and because writer/director Whit Stillman, wants them to be that way.

The one exception is Chris Eigeman, one of my all-time favorite actors, who shines in his first on-screen role. Five years later he would star in one of my favorite films, Kicking and Screaming, but he’s already wonderful here.

His brilliance outshines the rest but his character also outshines them so it plays perfectly with the story.

The film itself takes a while to warm up. Watching it again for the first time in quite a while, and not having previous reviewed it, I couldn’t quite remember why I was so fond of it. I stuck it out, assuming it would eventually come back to me, and I was richly rewarded for doing so.

This is a film that warms up slowly, but eventually simmers to a charming boil. The characters are so inevitably naive and sweet, or total bastards in the case of prototypical bad apple Rick Von Sloneker, that you can’t help but fall in love with them a little bit. A special treat is the cameo by Whit Stillman, as an older UHB that two of our kids run into at a bar, who presents them with ideas about their future that they can’t accept.

The ending of the film is lovely, you get the sense that it’s really just the beginning for these kids. Are they doomed to failure because of their background? They certainly think so. - Apr 9th, 2014