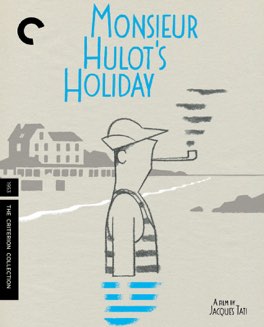 A film about the humor inherent in everyday life. It’s charming, and lovely, and wonderful.

This is such a charming film. It does such a great job of evoking a sense of place, rather than focusing on a specific story.

It’s full of light and air and was clearly a labor of love. The whole film seems to float above the clouds, creating a version of seaside France that has probably never really existed. And yet, this is a place we’ve all been, that lazy vacation place where strangers become temporary friends and everyone just wants to have a nice time.

And, of course, since this is a Jacques Tati film, the whole thing is turned on its head and becomes a hilarious farce.

The humor here doesn’t come from the story. Much like with Playtime, there really isn’t much of a plot. Tati doesn’t use plot to create his humor, instead he uses many small vignettes that, together, form the idea of a thing instead of the tale of that thing. It’s completely unlike any other films I’ve seen.

Nothing “happens” in a Tati movie, I mean there are certainly many small moments in this film of things taking place, but there’s very little overall momentum or story. The entire plot is that a bunch of people are on vacation, including the well-meaning but bumbling M. Hulot, played by Tati himself. And humor ensues.

I also can’t really comment on the acting in this film. There’s almost no dialogue for one thing. It’s not a silent film by any means but the dialogue is almost entirely confined to random snatches of conversation, I don’t think there’s a single complete conversation in the whole film. There also aren’t really developed characters here, instead there are a series of very normal people who wander around providing bait for the humor.

So, the acting is well done in that it absolutely achieves its goal, but it’s not really something you can discuss as far as any one person’s specific role. The one exception is M. Hulot himself. Tati does such a wonderful job creating the persona of this awkward, clumsy, lovable man.

I would imagine that none of this description really helps to explain what this film is really like, or why I enjoy it so much. It’s a hard thing to explain really. I think I would hate this film if it just wasn’t so obviously made with an absolute love for people.

The charm here comes from how much Tati clearly loves everyday situations, and the ridiculous things that happen to all of us when we find ourselves in those situations. From pranks played by unruly children, to a huge gust of wind, to broken down cars, Tati finds the humor in everything. And not in any kind of hurtful way, no one is the target of the jokes, instead everyone exists on an equal playing field where the humor is life itself.