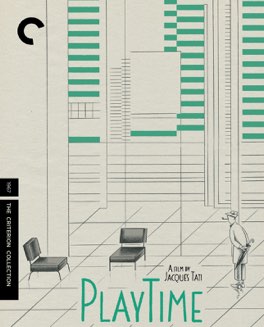 An absolute masterpiece, and a film that I get something totally new from every time I see it. This time I noticed more of the background detail.

One of the advantages I have in doing this project, is that I’m watching most of these films for the first time. Each film is a new experience. My challenge is to then write about that experience, or something that experience motivates in me. For a film like this one though, that I have seen so many times, and which has such great importance to me, I find myself struggling. I suppose I’ve already processed my feelings long ago, and the film itself exists mostly as a memory now.

This film famously bankrupted director Jacques Tati. It’s not terribly hard to see how. The cost and magnitude of the sets alone must have been absolutely astronomical. Tati’s work always existed in a delicate balance with the demands of an audience. His humor is funny, uproariously so to me, but it’s also abstract. As his career progressed, his films moved further and further into humor as an idea, culminating in this film. What’s funny becomes more and more disconnected with anything tangible. It’s not a shock that audiences of the time weren’t sure what to make of this film.

It also came at the height of the modernism it’s satirizing. To watch it now, decades later, is a fundamentally different experience. We’ve had the subsequent interaction design revolution. I find the terrible UX of everything in this film hilarious, but probably not in the same way someone of the period would. It represents the past to me, not the future. The idea of modern life as antiseptic and disconnected isn’t an idea, it’s a reality that I’m currently confronting.

The film is absolutely brilliant. It’s a manual on how to deconstruct humor until you boil it down to just its base essence. My favorite running gag, where a giant glass door has been shattered, but the doorman simply holds up the knob and everyone assumes the door is there, is revelatory. It creates its own internal film logic, with its own boundaries, but still exists in the same perceptual world that I live in. This is one of the films that opened my eyes to the possibilities in non-verbal comedy. - Jun 25th, 2017