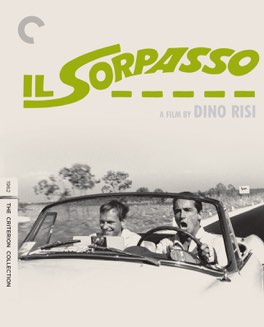 A startlingly entertaining and interesting film. I had absolutely no idea what to expect, and what I found was incredible. I’ll need to watch this one again.

Wow, what a fabulous film. Far more than the entertaining, but pointless, thing it seems at first, it takes so many crazy turns but ends up somewhere completely real.

I had no idea what to expect, all I knew was that it was a famous Italian road comedy. What I ended up with was something that really affected me, and made me think about life. There are many, many charming and funny moments here, but I think I’d call this film a comedy in the same way that The Royal Tenenbaums is a comedy.

That is to say, it’s definitely funny, but I think it’s ultimately attempting something far more serious and important than just making us laugh. This is why I watch all these films, because sometimes you randomly end up finding one as incredible as this, and they almost always come completely randomly.

Still, in order to end up somewhere you have to start somewhere. And this film starts with the loud, brash, charming, roguish Bruno speeding through the empty streets of Rome during a holiday. Played absolutely perfectly by Vittorio Gassman, Bruno is our extroverted playboy. A man who has been separated from his wife for fifteen years and seems to be just living life as it comes to him. He stops on a whim outside the apartment of Roberto, played equally phenomenally by Jean-Louis Trintignant, and asks to use his phone.

Roberto, our shy, introverted, law student who should be studying, somehow ends up on a tour of the Italian countryside with Bruno. The meat of the film is concerned with their adventures; they are so unbelievably different, something the films plays up by allowing us to hear Roberto’s inner thoughts while keeping Bruno completely opaque.

They drive around getting in one crazy episode after another, a little bit like a Jacques Tati film, although not at all slapstick. But at some point the film changes direction. Instead of just being a road trip where Roberto is learning how to live a little, it turns its attention to Bruno’s nature, and that’s where things get really interesting.

Suddenly what seems like a simple comedy about opposites, like an Italian road tripping Odd Couple, becomes a film that examines quite a few really deep ideas. There is, of course, the idea of how to live a good life, personified in the clash of the brash exuberance of Bruno and the prudish sadness of Roberto.

It’s all very interesting and thoughtful, but the film is remarkable because it manages to present all these ideas without losing any of the mad energy it starts with. Far too many films create a wacky and fun feel, but end up too serious, leeched of their humor and spark when attempting to be “about” something.

It’s to director Dino Risi’s immense credit that this film is entertaining right up until the end.

It’s not just the fabulous acting, or the interesting ideas though. This is also just a really, really well made film. The entire thing is gorgeous. I suppose it’s not hard to have beautiful scenery when you’re filming on location around Italy, but man there are so many incredible backdrops. It would be super interesting to take a tour of Italy that followed this exact route.

The cinematography is expressive and open, which is especially impressive when you consider that they were filming a maniac driver in nineteen sixty-two. This film would have been impossible to make even twenty years earlier, the need for rear projection visuals to attempt to capture the recklessness of Bruno’s driving would have sapped the film of a lot of its potency.

On a random note, I learned afterwards that all of Roberto’s dialogue was dubbed. Trintignant was a French actor, and he was always dubbed when working in Italy. It’s even more amazing then, that his character is so strong.

I loved absolutely everything about this film, what a treasure. - May 7th, 2014