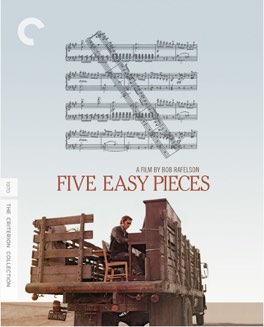 A complicated film about a confused and restless man who can’t seem to find a way to engage with the world. Probably more explosive when it first came out, I still found enough redeeming qualities to enjoy it.

I could listen to Jack Nicholson talk all day long. There’s just something about his voice, so gritty and yet soothing.

He could be saying almost anything and I’m immediately hooked. Beyond that though, this is an odd film, one that I’m not sure I’ve completely wrapped my mind around. It’s not without merit for sure, full of complex people and an extremely realistic portrayal of a certain mentality about life.

A huge portion of the film takes place on what is almost certainly Bainbridge Island, but definitely one of the Puget Sound islands anyway, and so that naturally hooks me in given that I come from Seattle as well. So, yeah, there’s plenty to like and think about, but I’m just not sure how I feel about this one.

This film comes from the same studio that made Easy Rider, and it explores some of the same themes. Mostly those of the alienation of the times and the difficulty of getting through ones life. Rather than focusing on the journey though, this film focuses most of its attention on one man. That man is Robert ’Bobby’ Dupea, played to perfection by Nicholson, a drifter of sorts who was raised by his rich Seattle family to be a famous concert pianist.

He’s abandoned that life long before the start of the film, and when we join him he’s living somewhere in Southern California and working on an oil rig. He’s got a girlfriend he clearly has very conflicted feelings about, one he seems to cheat on whenever he has an opportunity, and a best friend who is wanted by the FBI.

After his friend gets picked up and he’s quit his job he learns from his sister that their father has had a couple of strokes and is seriously ill. She prods him into heading back home to visit his family, and after his girlfriend threatens to kill herself if he leaves her he takes her along as well. If it seems like the story is lacking in any kind of serious direction it’s basically because it is. Things happen for sure, but the point here is less about the story and more about the man himself. And what we learn about him is a mixed bag at best.

That’s not to say he’s all bad, just that he’s a deeply flawed human being who really shouldn’t be imposing himself on anyone. There is a nice scene where he yells at some overly intellectual people who are belittling his girlfriend, and in general it seems like he wants to do the right thing, he just doesn’t know how. Mostly he’s just a certain kind of selfish spoiled child who doesn’t know how to live in this world.

He makes it very clear that he has basically no love for anything, because he has no love for himself. In one of the rare moments of true honesty he displays in the film he admits that he isn’t running to get anywhere, he’s just running away. Anytime life gets too real he bails. It seems like he wants to make it work with his girlfriend, Rayette, but that he just can’t get himself to really do it. The scenes where they’re together are the hardest parts of the film to watch; he’s basically rotten to her and you just want her to get up and leave him, but she never does.

She’s also clearly not on the same level as he is intellectually, and while that lets him get away with all his various antics, you can tell that he could never really settle down with her. It’s made especially apparent when she shows up at his childhood home. She could not be more foreign to the life he came from, and it’s clear that he yearns to be a part of that life even as he’s running away from it as fast as he can.

It’s definitely interesting as a character study but I think I was born in the wrong era to really appreciate this film. To American moviegoers in 1970 it must have seemed like such a breath of fresh air to see a film that passed no moral judgment on the very real character that was being studied.

Americans, up to that point, were so used to morality plays being enacted on the screen, that to see a film not impose some very harsh penalty on a man as flawed as this must have been a true revelation. And we know it was because the critics of the time said so. I, however, am not a typical moviegoer in 1970. I’ve seen this film done dozens and dozes of times since it came out, with all manner of anti-heroes and flawed people being the focus of a serious film.

Because of that the film doesn’t have the same impact on me that it would have had, had I come into it with the expectation of a certain kind of film experience. That’s not to say that any of this makes it a bad film, just a less relevant one than it would otherwise have been. There’s certainly plenty to experience and enjoy here, the famous scene in the diner is absolutely hilarious and worth watching. I didn’t love this film, but I did like it, and it made me think.