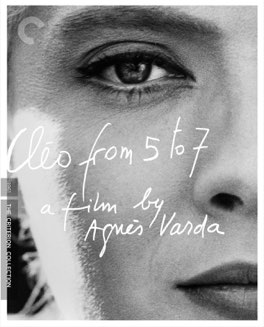 A masterpiece of the character study, this film is basically perfect. So full of real life and feeling, if you’re not moved there’s something wrong with you.

Agnès Varda is such a special filmmaker. Her work, although associated with the French New Wave, is so different from the male dominated features of Jean-Luc Godard or François Truffaut. It’s so much more character driven, reveling in small moments and intimate thoughts. Varda clearly finds people much more interesting than melodrama, and she uses that fascination to create incredibly intricate films. Her roots as a documentarian are also never far away; her camera work is so meticulous, focusing on small details and moments. It’s all completely breathtaking, and this film is absolutely wonderful.

The story follows Cléo, an up-and-coming French singer, from roughly 5 to 6:30PM (the title is somewhat inaccurate), as she waits to find out if she has cancer. She wanders around Paris, terrified of the news she’s about to receive. As she moves from a fortune teller who predicts death, to a hat store, to a brief rendezvous with her much older, and clearly disinterested, boyfriend, and so on, she reflects on her fears and on her superstitious nature. Eventually she randomly meets a soldier in the park, on leave from fighting the war in Algeria, and finally gets to know someone who sees her as a person, not just as a beautiful doll. The story moves effortlessly through different moods and moments, Cléo herself is charming, petulant, childish, a snob, stuck-up, terrified, and, ultimately, very relatable. She’s simply a woman who’s waiting for news she assumes will be bad, whose life is so completely structured that she can’t even breath anymore. She’s surrounded by people who barely tolerate her, who are only interested in her talent, and she yearns for freedom without even knowing it. In short, she’s a person like anyone else.

The role of Cléo would be an absolute disaster if not played perfectly. She’s such a complex character, being pulled in so many different directions, that it must have been almost impossible to find someone capable of pulling it off. Luckily, Corinne Marchand, who really didn’t do much notable work other than this, is more than up to the task. She may not have had a deep career, but she’s a revelation here. Unbelievably beautiful, but with both a weakness and a strength behind her beauty. She’s somehow able to strike the perfect balance of all the various emotions she has to simultaneously convey. She’s petulant, but not comically so. She’s angry, but not full of rage. She manages to glide through the film, so graceful, but also right on the edge of having a breakdown. It’s an impressive performance. The rest of the cast is basically just set dressing around her, but the soldier she meets at the end is worth noting as well. Antoine Bourseiller does an amazing job of playing a man who is tender, knowledgeable, self-effacing, and able to puncture Cléo’s more absurd tendencies. He’s basically made for her, and after watching her pretend to be something she’s not around her boyfriend, it’s really nice to see her with someone where she can just be herself. With her boyfriend she was afraid to discuss what was happening to her, but the soldier accompanies her to the hospital to get her test results, just so she won’t be scared.

This film is a stunning achievement. So bold and so full of risk. La Pointe Courte, which I loved, is a much more airy and insubstantial film. This film, on the other hand, is completely down to earth. Where La Pointe Courte balances the eccentric characters of a village that almost doesn’t seem real, with the absurd and stilted love affair of the main characters, this film is all about a very real, very believable person in trouble. She’s so full of life and character, I know people just like her. Her fear of cancer is completely understandable, as are the rest of the troubles in her life. There’s absolutely none of the pretense of film here, it feels more like a real-time documentary about one woman than it does any kind of statement about life. Rather than attempting to explain some huge concept like love, this film is about people, and one person in particular. It’s one of my favorite films. - May 9th, 2014