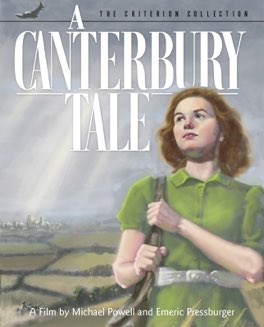 A lovely film about a minor mystery in the English countryside. It’s well made, entertaining, and provides a fascinating glimpse of war time England.

I seem to be on quite the Michael Powell and Emeric Pressburger kick lately.

This is a decidely minor film, especially when compared to the The Life and Death of Colonel Blimp, but a lovely film nonetheless. It’s full of charm and joy and was really something of a treat. It’s a small story but sometimes those can be delightful and this one definitely is.

There’s a humanism in the films of Powell and Pressburger, otherwise known as The Archers, that I’m really enjoying right now.

The story here centers on the fake town of Chillingbourne and the real Canterbury, in Kent. It’s World War II and a young American soldier arrives in Chillingbourne, with an Englishwoman and an English soldier. As they’re walking into town a man in a Home Guard uniform pours glue all over the woman’s head.

After a curious meeting with the town magistrate the three decide to investigate the affair. The rest of the film concerns this picturesque little town and what they find out there. There’s a bunch of very nice scenes and some funny moments.

As I said, it’s a small story but wonderfully executed.

The acting on the whole is pretty good. The American soldier is perhaps a bit too gee whiz for my tastes, but it’s interesting to see how American’s were perceived by the British public during this period.

Anyway John Sweet does quite a nice job with the role, especially when you consider that he made this film while actually a soldier in the army. The Englishwoman, played wonderfully by Sheila Sim, is probably the best part of the whole film. She has a quality that reminds me of Margaret Lockwood in The Lady Vanishes. This film reminds me quite a bit of a more nostalgic kind of Alfred Hitchcock film in several ways. The mystery, the suspense, and a lot of the witty conversations are quite similar to his British films.

It’s also nice to see Eric Portman again, and this time in a much less sinister role.

The cinematography is another treat here. The various scenes in the countryside, and in Canterbury, are wonderful. There’s a meeting between a horse drawn carriage and some tanks that’s especially notable.

There’s also a really nice dichotomy in the scenes of Canterbury. On the one hand you have a beautiful old cathedral and on the other hand a row of destroyed businesses, taken out by the blitz. The filmmakers do a marvelous job of handling this situation and it really drives home the effect the war was having on small-town England.