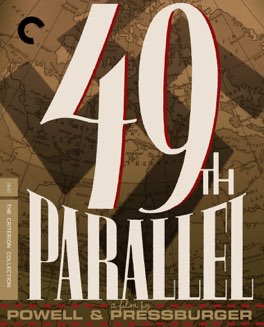 A great movie and also a very interesting one. It has a take on war time propaganda that I hadn’t seen before. Very much worth watching.

This is a fascinating film. It’s first and foremost propaganda, directed at the United States by England, to encourage them to enter World War II.

It’s also wonderful. Subtle and incredibly well acted, with a legitimately exciting story and well developed characters. It’s novel use of Nazis as the protagonists a memorable and successful choice. I would love to be able to go back in time and experience how audiences felt when they first saw this film and those characters as the focus.

The film starts with an attack by a Nazi U-Boat on Hudson Bay, Canada. After a small raiding party has left the submarine, Canadian air force planes destroy the boat and the crew is presumed dead.

The surviving men show up at a Hudson’s Bay Company trading post and commandeer it, thus beginning a long journey in an attempt to flee to the “neutral” United States border. What happens next is thrilling but also telling, illustrating how people felt about the war and the enemy at that point.

This is masterful film making. The acting here is superb, you hate the Nazis but you also begin to understand them as people, not just as caricatures. Special notice should be taken of Anton Walbrook, who plays the leader of a group of German Hutterites, and who delivers an impassioned speech against Nazism and facism in general.

But, really, everyone does a great job here, including Leslie Howard who I enjoyed so much in Pygmalion. The incredible acting really moves this film from being purely an exercise in propaganda and turns it into a great film.

The cinematography is also great. There are so many scenes in Western Canada that are absolutely breathtaking, especially those set in Banff National Park. It’s incredible to see the Inuit villages of Hudson Bay captured in this way.

The shots during the tense moments of dialogue between the Nazi commander and the Hutterite leader are also perfectly done, enhancing the moment tremendously.

This film is fascinating, as I said, on several levels. First purely as an excellent entry in the long filmography of Michael Powell and Emeric Pressburger. But also in its depiction of attitudes towards Nazis during the war. Some of the other films I’ve watched from this era, like Night Train to Munich, portray the Nazis as almost comical bumbling figures. This film definitely does not. They are, instead, shown as very efficient true believers, both scary and, ultimately, pitiful.

It’s a much more interesting portrayal, and, I imagine, a much better form of propaganda for the war effort. - Apr 4th, 2014