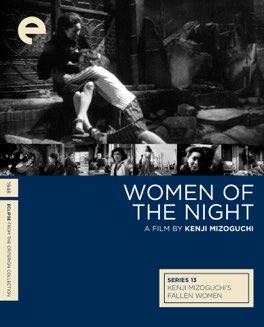 Bleak. I would describe this as bleak.

Women of the Night

I’m not at all confident that I know what Kenji Mizoguchi was aiming at with these films. Am I meant to empathize with these women? Are they the heroes of the films? On the surface I have thought yes, these films are exposing the inherent sexism that Mizoguchi found in the Japanese society of his era. There are some things in this one that have me questioning that assumption.

This film is seriously just so damned depressing. It starts out dark and never brightens at all. Supposedly Mizoguchi was enamored by Italian Neorealism, and man he really, really went for it. The story starts with a woman learning her husband has died as a result of World War II. Then her baby dies of tuberculosis. Then she becomes homeless. Oh! Then she finds her sister, that’s happy. But then the sister sleeps with her boss, who is also her lover, spiraling her into revenge prostitution.

Nothing better happens to anyone else. The sister gets pregnant but loses the baby due to syphilis. The boss turns out to be a drug dealer and goes to prison. The younger sister of the ex-husband runs away from home, is raped, has her money stolen, and is forced into a life of prostitution. It’s all just endlessly bleak.

This isn’t necessarily contradicting what I assumed was the point of these movies. It’s a bit much, perhaps, but it’s still strongly making the point that Japan of this era was incredibly unfair to women. But then the last couple scenes undermine a lot of that. First the women go to a sort of halfway-house, and get lectured on why all of the problems in society are actually their fault. They are told that they need to redeem themselves, stop acting so shamelessly, and save the country with their virtue.

Then, the main women who is on this disease revenge tour against men decides to go straight. She’s initially attacked by all of her fellow prostitutes, but then gives a speech about morality and wins them all over.

What am I supposed to do with this? Is Mizoguchi saying that really this is all women’s fault? That they just need to not be prostitutes and all of societies ills will vanish? I don’t think so, that would be a very odd turn. But the moralizing just completely fails to cohere with the earlier story. - Oct 14th, 2022