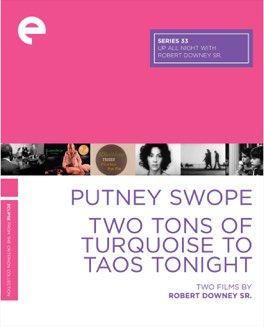 This was utterly pointless and meaningless. Looked like they had a lot of fun making it though!

I don’t understand what the point of making a film “without a beginning, middle, or end” is. That sounds like the pretentious wankery of someone trying way too hard to do something “edgy". Honestly, it reminds me of myself in my college Video 100 class. We were assigned the task of making a film exploring sound and I chose to make a silent film. How unbelievably avant-garde of me right?

So, yeah, this is a complete and utter mess of pointlessness. Robert Downey Sr. has admitted that there is nothing like a purpose to any of it. I was so prepared to just absolutely hate it and slog my way to the end, only to come here and deliver an absolute roasting. But then something else happened instead. I can’t say I “liked” this, but... there was just so much fun energy to it.

I have no idea how this was made, but my guess is that Robert, his wife Elsie, his friends, and his son Robert Jr. just... made random films when they were inspired or bored. The whole thing feels like it was just talented people messing around, and then Downey cut the entire thing together into some kind of Dadaist mess at the end. I can’t totally hate that. There were some really funny lines ("I have a brain tumor", “It’s all in your head") and some really great moments. Is it a film? No, yes, not really, I don’t know. But it’s definitely something. - Nov 22nd, 2022