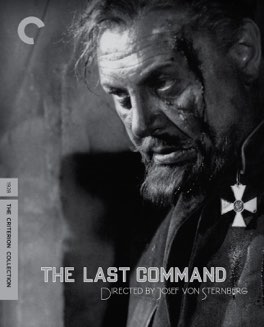 What an absurdly brilliant premise. Seriously, folks, this is the stuff of movie magic. Absolutely ridiculous, of course, but so damn good.

Perhaps I’m being a killjoy, but I just don’t buy it. Not that a Russian Czarist General could end up an extra in Hollywood, that actually happened. Not even that a Bolshevik revolutionary could fall in love with him, after being captured, even though he’s a reactionary aristocrat, simply because he displayed the tiniest concern for human life.

Even that a different Bolshevik revolutionary, that he sent to prison, could end up a Hollywood director. That the director would then cast the former General as a version of himself, and set him up for public humiliation. It’s all in the realm of suspension of disbelief. But that the director would suddenly care about him when he died? That he would call him a great man? That’s “If you like that, I’ve got a bridge to sell you!” territory.

The essay that comes with the film suggests that this is an example of Hollywood’s general reactionary attitude, and I agree with that. Hollywood is a force of almost pure capitalism, and as such has never really had much of a spine when it comes to social change. Sure, most of the people involved in Hollywood are liberal, but the industry as a whole isn’t. It’s mass market, and the mass market is almost always profoundly conservative in its attitudes.

The Russian revolution is a fascinating story, one I recently learned far more about through the fabulous Revolutions podcast. I’m certainly not going to claim that I’m any kind of expert after listening to one podcast series, even a super long one, but one thing I know is that the Bolsheviks weren’t just playing around. They were obsessive about their beliefs. I just don’t think that anything the general did in this film would have endeared him to the director in any way. Not buying it. - Sep 9th, 2022