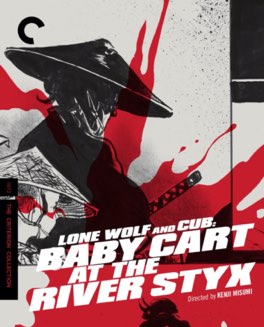 I’m not really sure where the moral center of this lies. In the first film he was helping someone in legitimate need, but here he’s just killing for capitalism?

Lone Wolf and Cub: Baby Cart at the River Styx

There are some standard things one can usually expect from a sequel to a successful film. The main one, with some exceptions of course, is that the film will be very similar to the first entry, but with everything turned up in intensity. The same, but more. That’s absolutely the case here. This is more violent, with more avant-garde camera work, more color, more ridiculous deaths, just more.

I enjoyed the first film, and I enjoyed the more as well. That’s not always a given, but it generally speaking all works here. What I find interesting to contemplate is exactly what the moral center of this series is shaping up to be. Samurai films, and superhero films, both revolve around their morals. Is this a story of a hero, a villain, an anti-hero? What is this?

Itto Ogami clearly has something of a personal code. That much is made very plain. But, is he a hero? He clearly doesn’t think of himself as one. He describes himself as walking the “demon way in hell” and using that as justification for whatever he’s doing. Specifically, for being an assassin for hire. At least in the first film he was helping a legitimate cause, this time he’s just protecting the wealth of some capitalists.

His main purpose is supposedly as an instrument of vengeance, a very different spirit than justice. In that sense, I’m also not quite sure where this is all going. He’s sort of wandering around, seemingly somewhat aimlessly, killing people for money. I’m not really sure how that helps accomplish the goal of destroying the people who killed his family. There are still four more movies left to find out I suppose. - Feb 15th, 2022