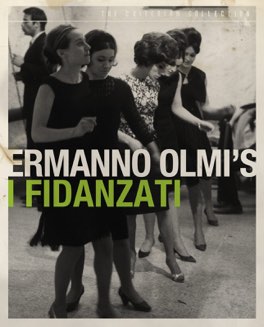 I enjoyed it, it’s so beautifully shot and expressive. I have to ask though; is this actually a romantic film? Or is it just the story of a fairly douchey guy who suddenly pines for old faithful when his shiny new life turns out to kind of suck?

Perhaps I’m simply in an overly cynical headspace right now. Still, I just can’t really get there with the idea that this is a tender romantic film about separation making the heart grow fonder. It’s a beautiful film and one that I enjoyed, but I saw something far less noble in the story.

This tells the tale of a young couple, Giovanni and Liliana, who don’t seem to be clicking anymore. He’s distant and cheating and she’s miserable about it. On top of that he’s recently accepted a promotion and transfer, that will take him from Milan in the north of Italy, to Sicily in the south. He’ll be gone for at least a year and a half.

The film is almost entirely centered on Giovanni, but also doesn’t allow almost any reveal of his interior emotions. Instead what we see is a guy going about his business in a new place. He’s lonely, and bored, and things are honestly kind of crappy there. In that vacuum Liliana sends him a letter and he responds in a surprisingly tender way. She’s taken by this and they start a meaningful correspondence for perhaps the first time in their entire relationship. Still when they finally talk on the phone it’s stilted and perfunctory.

My read is a lot less touching than I’ve seen others espouse. Rather than the two of them learning the true depths of their feelings, I see one guy who thought the grass was greener, discovered it wasn’t, and suddenly wanted to go back to his safety net. If he had met a single woman, or even a new male friend, in his new city, I don’t think there’s any way he contacts her at all.

Because we don’t ever see what Liliana is going through, there is also no emotional journey for her. She starts out as a jilted fiancée and ends up with her shitty fiancé acting like he cares all of a sudden. There’s no growth there, just a woman taking back a deadbeat because he’s decided to try. How romantic. - Aug 4th, 2022