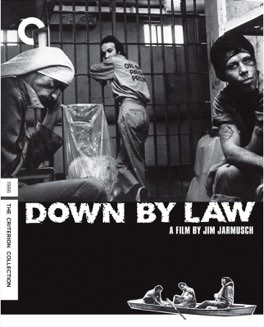 We all need a Roberto Benigni in our life from time to time.

I’ve been trying to decide what it is about Jim Jarmusch’s films that I like so much. Certainly they are stylized, in a way that I find very cool but also relatable. That helps a lot. More than that I think it’s just that I also have a certain affinity for the dregs of society. I’m ultimately a lot more comfortable with squalor than I am with luxury.

This movie shouldn’t really work. The story is pretty threadbare; the tale of a pimp and a DJ, who are both arrested for crimes that they happened to have not committed. They end up in jail as cellmates and immediately absolutely loathe each other. Most of the film takes place over the course of the next year of their indeterminate jail sentences.

It shouldn’t work, but it does, almost entirely because Roberto Benigni torpedos in from somewhere and completely steals the entire show. He is hilariously weird, and his weirdness perfectly matches with the cooler than cool of both John Lurie and Tom Waits. What you get is a prison break film where both prison and the break are absolutely the least important things that are happening. I loved it. - Aug 12th, 2022