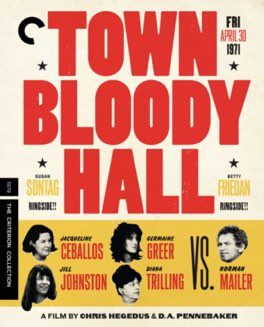 Norman Mailer was really just the worst. To be a good moderator you have to be at least a little bit empathic.

Perhaps because of my own age, I turned forty about a month ago, I have trouble realizing just how long ago this all took place. This film was released in 1979, but it was filmed in 1971, meaning that the event that is being captured is now fifty years old. The distance from me to it is the same distance as from it to 1921. It’s important to bear that in mind.

This is a documentary covering what would likely otherwise be a pretty small event in the history of Feminism. Without the existence of this footage, that night all those years ago would almost certainly be forgotten. Nothing monumental took place, no “history” was made. No, what we have is something subtler, but no less interesting than that. We have the chance to look back at a spectacle. To see how some people actually thought and behaved in that era. And to see for ourselves some of what’s changed since, and a lot of what’s, unfortunately, stayed the same.

It’s incredible to look back at this moment in feminist history and see that it was held hostage by the petty whims and hurt feelings of one fairly odious male writer. He had been hurt by the words of Kate Millett, who had dedicated a chapter in her book Sexual Politics to analyzing his work. Of course, Millett isn’t here, she refused to appear. Instead he takes out his fragile ego on the four woman who do appear, Jacqueline Ceballos, Germaine Greer, Jill Johnston, and Diana Trilling. It is both fascinating and, occasionally, hard to watch.

Mailer is a toxic persona, both in this film, and in every other interview or appearance I’ve seen him in. I’ve never read any of his books, and have no interest in doing so. He’s just so clearly toxically masculine, so clearly clueless as to what he’s talking about, and so unbelievably thin skinned. I believe that he mattered in this era, that he was a Writer, and therefore worthy of note. I am glad that I don’t have to live in that era though, and can therefore regard him as having little importance and no merit.

I’d like to think we’ve come a long way since this night, and in a lot of ways we have. Far be it for me, who does not identify as a woman, to determine to what degree Women’s Liberation has succeeded or failed. What I do know, is that when a man in the audience heckles Jacqueline Ceballos by declaring she is only interested in saving “half of humanity", he is the absolute embodiment of “All Lives Matter” energy, and a reminder that however far we’ve come, there is still a long, long way to go. - Mar 1st, 2021