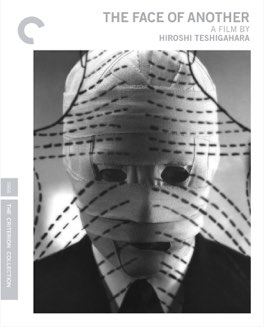 So… is it still cheating if your wife knows it’s really you all along?

The Face of Another

I’m going to “spoil” this as I talk about it, but I don’t think you should worry too much about that. The story is absolutely not what makes this worth watching. It’s the way it was filmed, the audacity of the direction, the beauty of the cinematography and set design. It’s an extremely cool and well made movie. The story is honestly stretched a bit thin for the coolness that surrounds it.

This is the tale of a man who has been in an industrial accident that has badly damaged his face. He wears bandages all of the time, and it has strongly affected his overall mood and willingness to encounter life. He’s honestly pretty depressed. He’s found a mad scientist type doctor who is willing to make him a supposedly perfectly lifelike mask, so that he can interact with the world again. The doctor is sure that the mask will cause him to become some kind of immoral monster that presages the destruction of society at large. The man just wants to seduce his wife, who he feels has turned away from him since the accident.

What’s fascinating about this, is that the man and the doctor are completely convinced that wearing a mask is going to create some kind of blank slate new person. They argue about whether the man will become some kind of murdering savage, freed from any sense of personal responsibility. The women in the film try to explain to them that this is absolutely nonsense. Your face isn’t the entirety of how people figure out who you are, and we all wear some kind of mask when we present ourselves to the world.

The wife of the man does the best job of explaining it, when she mentions to him that many women wear makeup as a mask all the time. Ignoring the films lack of interest in the patriarchal aspect of this, it’s still a decent metaphor, and perspective on life. The man totally misses it. When seducing his wife in the mask is “too easy” he becomes enraged, only for her to disappointedly tell him that of course she knew it was him all along. That she thought his coming on to her was a game to let her know that he finally understood that all she wanted was for him to act like himself again.

It’s just a surprisingly cool idea. The close-minded cluelessness of these men to the world around them. Their highfaluting nonsense concerns about some sort of moral apocalypse. The everyday earthiness of the women around them, who see just exactly how stupid and isolated they are. At least the man finally began to understand, unfortunately too late to do much about it where his wife is concerned. - Aug 31st, 2021