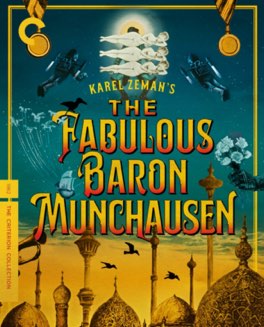 The Baron flirts with some pretty toxic masculinity, but it (mostly) all works out in the end. By far my favorite Zeman, and you know this is so damn cool looking, but he’s still not really for me.

After watching three feature films by Karel Zeman, and a whole bunch of shorts as well, I think I can confidently say that I find his work far more intriguing than entertaining. His movies are intricate masterpieces of design and special effects, and I have a tremendous amount of appreciation and reverence for them. Included with this film was a documentary about his life and work and I was glued to it. He was a fascinating figure. I just... don’t enjoy the actual films all that much.

This was probably my favorite of the three. It’s chaotic, and weird, and funny, and the story lags a lot less than the others. Still, I found myself adrift often, not being as interested in marveling at the visuals as Zeman himself seemed to be. I’m really not sure why. This is a beautiful film. The attention to detail is unlike anything else I’ve ever seen. The choice of Turkey for a setting is an incredible one, featuring some of the most amazing architecture and design.

There’s more momentum to this film as well. Less standing around and far more depth to the story. Or, well, that’s not really true. There’s basically no depth to the story, but that’s very much the point. It doesn’t pretend to want to tell a coherent narrative of any kind really. The point is just to enjoy the Baron, his foibles and oddities, and his interactions with a seeming time traveller. It’s a good idea, and for Zeman it’s reasonably well told. Maybe I was just prepared to be bored and thus was. I’ll need to watch this one again at some point to see. - Oct 2nd, 2021