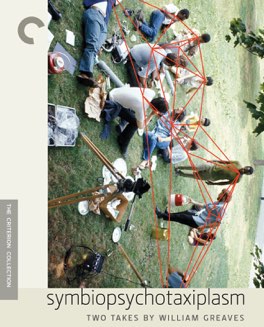 It’s once again taken me too long to write something, which is a shame, because these films definitely made me think.

There is an interview with Steve Buscemi included with these films, where he tells the story of how he was at Sundance in 1992 and saw the first of these films. He describes being absolutely blown away by it, shocked that it hadn’t achieved more renown. It ultimately led to him getting involved in a follow-up film made almost forty years later. I can imagine what he might have felt that day in ’92.

This set is broken up into two films. Take One was made in 1968, and Take Two in 2005. They are very different. Take One is a miracle. I can’t really believe it’s an actual film that exists. William Greaves set out on an experiment. He would film rehearsals for a supposed film he wanted to make, then he would film that filming, and then he would also film that filming. The entire time he would pretend to be a totally inept director. Just to see what might happen. To create a symbiotaxiplasm, or “those events that transpire in the course of anyone’s life that have an impact on the consciousness and the psyche of the average human being, and how that human being also controls or effects changes or has an impact on the environment."

It works. The crew eventually, supposedly, spontaneously rebelled against him, filming themselves having an intellectual discussion of the film, their role in it, and even the meta nature of what they were doing. It makes the film. What would otherwise just be a bunch of weird rehearsal becomes something so much more. It becomes a commentary on life, and on the people and attitudes of that era. It’s breathtaking.

Take Two was never going to be able to live up to it. The experiment, once run and popularized, cannot be recreated. It required obliviousness which was no longer available. Greaves knows that, of course, and doesn’t even try. Instead he provides an almost metatextual commentary on the first film. By bringing back the same actors, to play the same characters, and blurring the line between the characters and them as people, he tries to create some new magic. It doesn’t totally work, but what a cool thing to even attempt. - Dec 26th, 2021