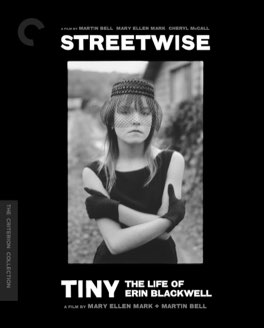 It’s the mixture of hope and hopelessness, and the utter certainty that there’s nothing else out there. For a lot of these kids, there really wasn’t. The failure happened way before we met them.

Streetwise/Tiny: The Life of Erin Blackwell

This is one of those moments where I’m so happy Criterion packaged things the way they did. I’ve seen that a lot of people would have preferred Streetwise to be alone in this release, maybe with Tiny: The Life of Erin Blackwell as a bonus feature. For me, the inclusion of both on equal footing was essential to my understanding and processing of these films.

After watching Streetwise, which takes place in one of the cities I grew up in, Seattle, and the one I usually say I’m “from", I mostly had a kind of sad feeling about the tragic nature of the lives of these people. After watching the followup, which tells the next 30 years of one of the kid’s stories, I have a very different perspective.

I’ve been seeing a therapist for a while now. In my case, I was largely motivated by wanting to understand better generational trauma, and explore how it affected my life. In watching the way that Erin Blackwell’s life has played out, I see so many of the same kinds of chains that I’ve been learning about in my therapy. The causes and the effects are different, but the overall structure is basically the same.

What got me to finally go to therapy, after talking about it for a long time, was the then-impending birth of my first child. Now, on the eve of my second child’s arrival, I find myself reflecting a lot. What I wanted, was to avoid continuing the chain of trauma that I had been given. To break some of the patterns and outcomes.

In Erin’s family I see exactly what the alternative looks like. Her children are all burdened with the same stuff she was, and so is her mother. It’s so absurdly obvious. What’s heartbreaking, truly, is the way that Erin can so clearly recognize what her mother did to her, but not what she’s doing to her kids in turn. It’s so very hard to watch. I don’t know yet how my kids are going to turn out, but I hope when they are in therapy someday they’re at least discussing something different than I am. - Dec 29th, 2021