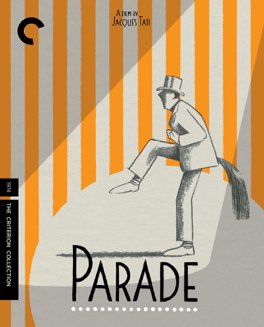 What can I say other than that Tati was a damn charmer? It’s filmed poorly, it has even less structure or plot than his other films, and it’s not even all that funny. It doesn’t matter. This was a joy to watch.

As in John Cage’s seminal 4′33″ the art here is something other than it initially appears. In that piece, an audience is assembled to listen to some music. Instead they are treated to four minutes and thirty-three seconds of “silence". But, of course, it’s not really silence. The art is made by the sounds of the environment. It’s the audience shuffling in their seats and the musicians ruffling their sheet notes. It’s the movement of the air. It’s the sounds of everyday life.

It’s a brilliant piece, and I suppose it’s darkly comic in the trick it’s playing on the audience, but it’s not fun. This film represents a similar idea, but it’s fun. The big idea here is that the line between a show and an audience isn’t as rigid as we might think it is. In fact, maybe it isn’t there at all.

This was filmed over a few days at a circus, and the story, such as it is, is that we’re watching a performance. But it’s clear from very early on that there is something more happening than we think. The “audience” is part of the act, as are the crew. The set painters are actually acrobats, and the audience are actually musicians. The line between performer, audience, show, crowd, it’s all blurred and then broken.

Jacques Tati was the best-case definition of an auteur. His was a singular vision and a complete universe unto itself. Like the best of the silent film comedians, he created his own reality, with its own basic laws. All of his films exist in this alternate reality, and we are lucky enough that we can occasionally visit, to be delighted and confronted with the absurdities of life. - Aug 23rd, 2021