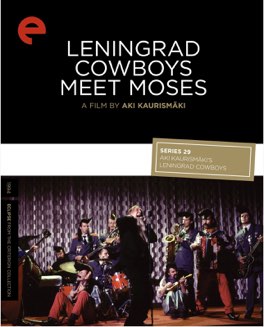 It’s fine that I didn’t “get” this. That’s not a requirement for me to enjoy a film, not necessarily. Meaning is one axis on which a movie might bring enjoyment, but it’s hardly the only one. The problem is that there wasn’t anything else I liked particularly about this film either, and at that point the lack of meaning becomes more of a problem.

I think Aki Kaurismäki thought the Leningrad Cowboys were inherently funny. That’s the only explanation I can come up with. I think he thought that, and therefore if you just put them in weird situations you would have a funny movie. Kaurismäki, at his best, is great at weird situations. The issue is that I don’t find the band particularly funny. So then you have a comedy with no jokes, and no laughter. This wasn’t funny, not even in a Wes Anderson “it’s called a comedy but really it’s not and you’re about to be emotionally wrecked” kind of way.

What this was, was boring. Just an endless series of vignettes, with almost no dialogue, and about as much purpose. Why did Moses steal the nose from the Statue of Liberty? Is that a Torah reference I didn’t get? I remember a lot about the life of Moses, but somehow I’ve forgotten the thievery portion of the story. Why did the band follow him blindly? Why was that CIA agent so inept? These are questions, but honestly I don’t even really care what the answers are, the movie was too boring for that. - Sep 7th, 2021