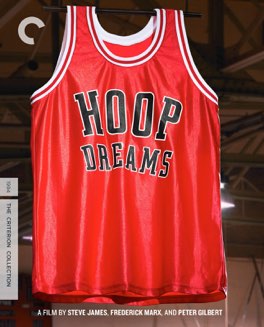 Both absolutely heartbreaking and ultimately hopeful. I wanted these kids to make it so badly, but as people, not just as basketball players

There are many, many approaches one could take when writing about this film. It contains multitudes as the saying goes. There’s so much depth and thought and experience to contemplate and consider. One area that felt especially relevant to me, is the idea that our dreams don’t remain static throughout our lives.

This is the story of two young Black men from difficult inner-city circumstances, who are obsessed with the game of basketball. When the film starts they are both 14 and hoping that their talents will eventually lead them to playing in the NBA. They are obsessed with this singular goal, to the expense of many other things in their lives like school and social interactions. They live and die with basketball.

Over time that changes. Spoiler alert: neither of them makes it to professional basketball. Both of them make it to college though, something that was otherwise outside their expected outcome. Basketball provides them both with opportunities that they could almost not have dreamed possible when they were younger. As the time goes on their expectations and desires also grow, to encompass more than the dream they had when their journey began.

It’s incredibly hard to become an NBA player. The vast majority of people who have that as their goal will fail to achieve it. Even amongst the tiny subset who might legitimately have the talent to try the odds are vanishingly long. It’s a fraction of a fraction of a fraction. Part of that is that you simply cannot have any other goals if that’s what you really want. It has to consume you.

That’s not a healthy thing to do. I get that it’s a ticket out of ones circumstance, but if that’s the only thing driving you it will likely not be enough to get there. It’s just that hard a goal to achieve, and there are too many others with the same goal and the same talent that you’re competing with for far too few spots. You have to be singularly focused to be a professional athlete and you have to sacrifice everything else in front of you.

These men grew and their dreams did too, and that’s ok. More than that, that’s a good thing. Being forever tied to choices you made at 14, or younger, isn’t super sustainable for growth as a human being overall. I know that my dreams from when I was 14 do not resemble my dreams now. I think that’s healthy. I cannot imagine being forced to pursue only what I thought made sense at that age. - May 21st, 2021