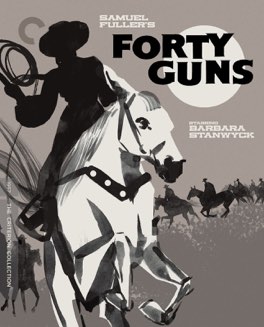 It’s the dialogue for me. They just don’t write ‘em anymore like Sam Fuller did.

One of the questions I’ve seen discussed about this film is, is it a Feminist picture? It’s a potentially interesting question, given that it features a powerful woman in a genre that isn’t normally known for doing that. It’s equally interesting in that it has an ending that somewhat waters down that power, and returns things to a more conventionally recognizable place.

To me, both parts of that conversation ignore something I find much more compelling. This is a movie starring a fifty year old Barbara Stanwyck and has her playing an object of strength and desire. That wasn’t just uncommon in 1957 when this was made, it’s uncommon now! The roles for women over forty in Hollywood haven’t changed all that much in the more than sixty years since this was released.

It makes this a startling movie, in that it’s just so rare to see an older woman given this much to do. It shouldn’t be rare, it should have that quality that trailblazers usually have. That thing where you watch an older example of something that’s commonplace now and it’s lost its ability to shock or move you. This hasn’t, at all. That’s depressing really, as it highlights just how far we still have to go as a society.

The cult of youth, especially female youth, is not just wrong and gross. It’s also so limiting. This movie shows the power of a love story, and a cool as hell western, starring older actors who are unabashedly playing as their actual ages. It casts the entire thing in a different light, and I really wish we’d see a lot more of this type of thing. If for no other reason than we all get older. - Sep 28th, 2021