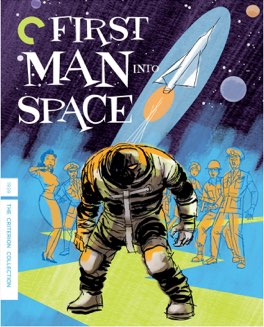 The problem with this movie isn’t that it’s cheesy, or low budget. It’s that it’s so boring.

There is an obvious morality to films like this. The big idea is that mankind has gone too far in some direction and the universe is letting us know it. Who ever has dared to cross the invisible line must now suffer, and often cause even more suffering to everyone around them. At the end we learn our collective lesson and resolve to change our ways.

In this case the barrier is outer space. This film came out in 1959, after Sputnik had orbited the Earth, but before the Apollo program had put people on the moon. It was the perfect time for wondering just what was actually up there. This same interest, and the same cosmic rays, created one of my all-time favorite superhero comic teams, the Fantastic Four.

The story here is that a brash young test pilot goes beyond the directives of his navy commander to become the titular First Man into Space. As a result he gets covered in some kind of meteorite dust that transforms him into a bloodless killing machine. Ultimately he’s really just seeking help, and in getting it he teaches us all a lesson about the importance of respecting boundaries.

I’m left wondering... what is the point of all of these types of stories? What is our culture trying to tell ourselves? That science, unchecked, will inevitably lead us to ruin? That we have strayed too far from religion? That the unknown isn’t actually meant to be known? It aligns with a certain kind of “spiritual” person who thinks that technology is an unqualified evil.

My personal opinion is that technology is neither good nor evil, it’s just a tool. Like any other tool the only thing that matters is how it’s being used. We can do awful things or amazing ones. We can learn or we can destroy. I’m not particularly worried about us finding space dust that turns people into vampires, but what the heck do I know anyway? - Oct 5th, 2021