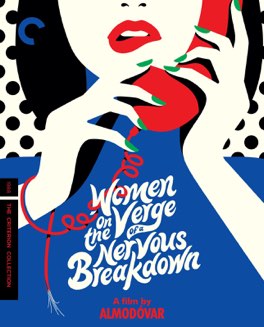 This was so totally and completely my thing. I loved every single absurd second of it, and I can’t wait to watch more of his films.

Women on the Verge of a Nervous Breakdown

What I like the most about this film is how completely straight everyone plays it. This is, in the end, essentially a screwball comedy, but it’s mixed expertly with drama, melodrama, and social commentary. It would be so easy to have the actors, and even the story itself, wink at the audience with each new insane thing that happens. To acknowledge, even for a second, the total absurdity of everything that’s taking place.

Instead, the film just keeps building and building to its crescendo, only to have the whole thing crash like waves against the rock and fall into stillness. It’s an absolute masterpiece of coincidence, built like an elaborate Jenga tower.

The story starts out deceptively small. At its core, this is the tale of a woman named Pepa, whose boyfriend Iván has just broken up with her. She’s received some news she needs to share with him, but he’s avoiding her. From that simple seed the tree just keeps growing and growing, and creating endless branches that wrap back around and re-join the main stalk.

Layered onto this basic premise is a friend who has accidentally aided terrorists, a scorned ex-wife turned insane person, an ignored and ill treated son, another nother woman, and so on. Just when you think the film might finally give you a second to breathe, something even more ridiculous happens.

What ties everything together is a level of supposedly random chance that breaks any possible believability. The right person is constantly in the right place at exactly the right time. In a sense, this entire film is one of those Rube Goldberg machines where one thing knocks over another, which triggers something to fall into something, and so on. Like if the opening scene from Pewee’s Big Adventure was made into an entire film, and the mechanisms were all the people. It’s breathtakingly complicated and I absolutely loved it. - Apr 23rd, 2020