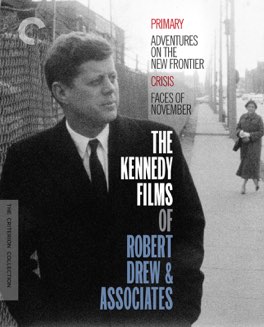 This is a treasure trove of history, one that we are privileged to have. I live for this kind of stuff.

I am right square in the absolute perfect demographic to find these films fascinating. I love history, it’s my favorite thing to learn about. I spent a long time completely obsessed with John F. Kennedy, his presidency, and his assassination. I studied the Civil Rights Movement in college, and feel connected to it. I have thoroughly enjoyed the other documentaries I’ve seen by D.A. Pennebaker and Albert Maysles. With all that, I was never not going to be interested in these films. Although, I did have to wait for the right time to watch them.

I saw the first in this set, Primary, for the first time in early 2017. At that moment, anything politics was far too depressing and anxiety triggering for me to be able to focus on what we have here. Luckily, with the 2020 election around the corner, I decided to try again.

Of these films, Crisis is the most interesting to me. It follows Bobby Kennedy and former Alabama Governor George Wallace as they square off over the Justice Department upholding a court order to integrate the University of Alabama. As I mentioned, I have been interested in the history of the civil rights movement for a long time. My professor in college told me his belief that Bobby Kennedy was changed by experiences like the ones in this film, that it made him a better man and could have made him a better president.

It was absolutely captivating to watch him try to navigate this situation, and to see the level of empathy he had for the two students involved, Vivian Malone and James Hood. I can see some of what my professor was referring to. It’s also absolutely incredible to see JFK struggling with whether to risk his political future on a televised speech calling Civil Rights a moral issue.

One of the documentary extras in the set makes the argument that this moment is what leads directly to the Voting Rights Act and a fundamental shift in the policies of the United States. Heady stuff.It’s also absolutely surreal to see what politics was like at that time. The cordiality of it all. In Primary, the way that interviews are done, the way that the public treats the candidates. In Adventures on the New Frontier the incredible access that the documentarians got, the kind that could never happen today, and the respect they responded with in making their film.