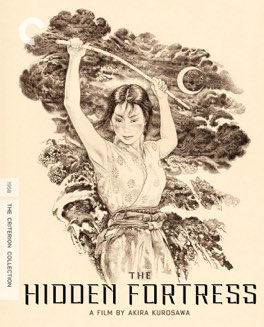 Nowhere near my top tier for Kurosawa. There are some great action set pieces, and some moments of fun, but the two main characters are the worst.

Just about the only thing I knew about this film before watching it, was that it was an influence on George Lucas when he was creating Star Wars. Watching the film it’s not hard to see the creative DNA. This story is told from the perspective of two men, who if you squint a bit resemble a couple of Droids we all know. As it turns out, not only did I not enjoy these men, but they made me realize that I don’t really enjoy their Droid cousins all that much either.

Lucas himself says in an interview included with the film that his primary inspiration from this was the idea of presenting an epic story from the perspective of the least influential people around. Certainly that is the case in this film.

This is a story of clan warfare, a princess on the run, a family in ruin, the titular fortress, and many daring escapes. The entire thing is told through the eyes of two annoying and greedy peasants who are simply trying to collect as much gold as they possibly can. On paper it’s a really cool idea, to center the narrative on these supposedly lowly people, instead of on all the heroes and villains around them. That part works very well in fact. What doesn’t work as well, at least for me, is centering on two jerks who are insanely annoying.

These two men are so single-mindedly focused on amassing wealth that it destroys any possibility that I might be rooting for them. They constantly mess things up. They are irritating at all times. They aren’t even good friends to each other, constantly selling each other out at the every opportunity! It’s a shame, because the more standard narrative around them is a pretty good one. I just cannot stand all of the weak and cringey behavior of these two pointlessly annoying men.

It almost ruins the whole film for me, luckily any time they aren’t on screen things immediately flip and become so much fun. The ratio is off, but those other good moments do a lot to make up for the bad parts. - May 5th, 2020