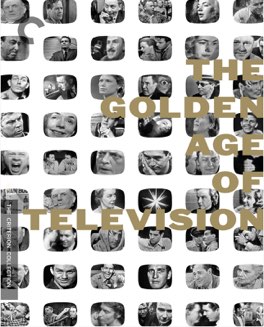 One of those treasures of a set, the ones that make me so grateful I have them on my shelf. There’s so much good stuff here.

The Golden Age of Television

We are currently living in a Golden Age of television. There is so much great content being produced, created specifically for the medium of television. Real money is being spent, and there’s no stigma for top creators. For most of my childhood that was definitely not the case. I remember television, and especially television movies, as being a distinctly second rate affair.

Movies that were “made for TV” were just assumed to be lesser than movies that were shown in theaters. They were shorter, with worse talent, and certainly not the pinnacle of anything. Even television shows were not presumed capable of telling really important or valuable stories. The idea of serialization, or of long form storytelling, implied something lesser.

This set features films that were absolutely made for TV, but in another, earlier, Golden Age. These films are universally high quality, ambitious, and significant. Most of them were remade into feature films, and not all of those theatrical features are considered to be the definitive version. These are serious and wonderful films. I’m not quite sure what happened in between the ages, but it’s so incredibly nice that we’re back in an era like this one, where amazing and powerful stories can be told in whatever format suits them best.

The other thing I wanted to mention, was that all of these were presented live, and the only reason we can watch them now is that there was a monitor on set and a special camera literally filming the monitor, during the airing. What you see in this set is very visibly the screen of a convex television. It creates a weird distance between the film and the audience. Like watching something through the window of an old electronics store. It’s another testament to how great these movies are, that it’s absolutely noticeable, and just as clearly doesn’t matter at all. - Sep 28th, 2020