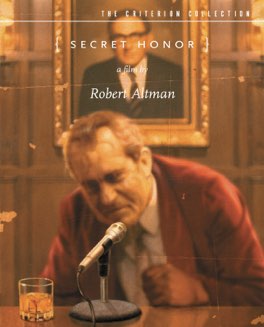 Altman’s weirder films are often hits with me, but this one was a slog to get through. I have absolutely no desire to ever watch it again.

This film is more audacious than it is successful. It’s an almost astonishingly impressive attempt, but, unfortunately, it doesn’t come together into anything coherent. I’m impressed by it, by the pure gravitas it took to make it, but I’m not a fan of the finished product at all. I strongly doubt that I’ll ever watch it again, and yet I don’t think it will leave my mind completely either. As is often the case with ambitious films I ultimately don’t enjoy, I’m glad I saw it, even though a lot of it was honestly a chore to sit through. It is art.

This is a filmed version of a one-man play. The play follows former president Richard Nixon, as he records what I guess are an attempt at memoirs? He’s in his private study, he’s getting loose, and he’s decided to lay out all the “facts” as he sees them, of what really happened to him and his presidency. What follows is a manic rambling of near insane proportions. He rails against the system, the media, his contemporaries, Eisenhower, Kissinger, and the “Bohemian Grove” crowd that are the supposed power behind his throne. It’s alternatively interesting and inane, with some seemingly out of nowhere family issues thrown in to the middle. The president barks.

The entire film consists of his ranting and raving to his microphone.

I like conspiracies, as a fun diversion. These days it’s harder to feel that way, as real life is increasingly being impacted, often in horrifying ways, by people who don’t seem to be able to separate conspiracy as theatre, from actual reality. But still, I enjoy a nice conspiracy, at least as a pleasant what-if.

This film has a neat conspiracy as its central theme, the problem is how much annoying nonsense one has to wade through to get to it. Philip Baker Hall has received a lot of praise for his portrayal of Nixon, and I get why. It’s impressive, but it’s also so full of ticks and outbursts that it can be hard to follow along. - May 27th, 2020