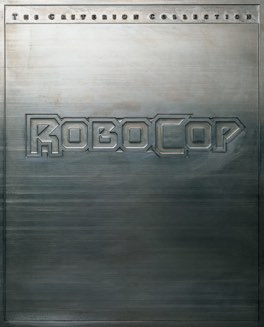 This film reminds me of Network. Like a super brutally violent Network, with a lot of the same themes. It’s so great.

They don’t make films like this very often anymore. This isn’t a sequel and it isn’t a reboot. This isn’t a rehash of a tired cliched old idea. It’s a film that launched a valuable new franchise of dubious quality, rather than just a new entry in an existing one. It’s vital, and ridiculous, and alive. It is, in its own weird way, a masterpiece.

Science Fiction is a wonderful medium for both satire and parables. The ability to construct a complete world, as similar or different to ours as desired, opens up amazing narrative possibilities. This film creates a Detroit that’s plausible. It’s clearly not our Detroit, but it’s not so far away, certainly not from people’s fevered nightmares in the 80s. It represents a future we thought we really might have, and we might still. Its story of a city so crime ridden and corrupt that human life stops having any meaning isn’t so farfetched.

On top of that premise it builds a wonderful satire of American capitalism. Everyone is crooked and everything is for sale. The violence is so totally absurd, in a similar way to something like Eating Raoul. The point is that it’s ridiculous. That’s what allows the message to come through. If the violence were realistic, or proportionate, than this would be a seriously messed up film. Things are so over-the-top, so that we know they aren’t meant literally. It works perfectly.

Hollywood rarely takes chances like this anymore. It’s a real shame, that something so completely new would have a hard time being made today. This isn’t based on a book, or a comic, or any other existing IP. It’s a completely new thing, telling a plausible and chilling story of what happens at the logical end of consumer capitalism. I loved it. - Mar 27th, 2020