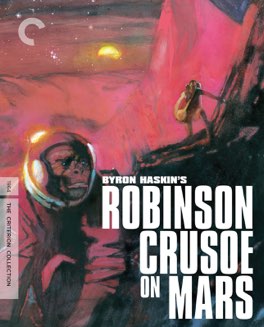 This is a bit long, and it drags. But it’s also shockingly fun when it’s moving.

I believe I’ve mentioned before that the time when I write these and the time when I post these are not consistent. I am often ahead of my posting schedule, and so events can seem out of context. I’m writing this entry in early June, but I doubt you’ll be reading it until months later.

With that in mind... this is a really weird time to be writing this. It’s also a weird time to have randomly chosen to watch this film. As is usually the case, I didn’t know much about it, beyond the blurb on the box, and the cover. I was expecting a science fiction film and I was in the mood for an escape.

What I got was a science fiction film, in fact a surprisingly science oriented one for most of the runtime. I say surprising because the cover of a man and his monkey didn’t really prepare me for the hardcore planet exploration and survival science of the first half of this film.

This is a science fiction film, but as is often the case with that genre, it has a larger point to make. This is a film about isolation, and loneliness, and the need of people to be in community. That’s a surprisingly on-point film to have chosen to watch right now.

I am a social introvert. By which I mean that I enjoy other people, and I enjoy being social, but it costs me energy. An extrovert by comparison is recharged by being around other people. For me, being around people is fun but draining, and afterwards I need some time to recoup by myself. For someone like me, being forced to stay home is a situation I can deal with.

To be honest, I mostly want to stay home in normal times too.

But, just like our hero, I know there is a huge difference between staying home for a closed amount of time, versus staying home forever. This will end, and I will get to go out into the world again. Hopefully soon, and with as little loss of life as possible. - Jul 16th, 2020