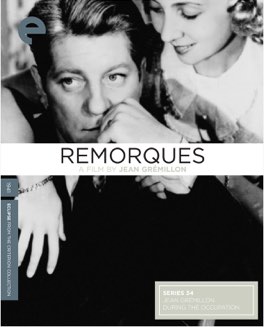 Turns out even the presence of Jean Gabin doesn’t automatically mean I’ll like a film. Especially if the character he's playing is unlikeable and uninteresting. This one wasn’t for me.

It can be very difficult to determine whether an idea I find in one of these films was intended by the filmmaker or not.

Sometimes it’s overwhelmingly obvious, especially if the story is didactic, but very frequently things are intentionally left much murkier. In those situations, I can only contend that whatever an individual viewer finds in a piece of art is “valid” in some sense, even if it's unintentional.

This film tells the story of André, a tugboat captain, who regularly leads his crew on dangerous SOS missions. Every time they head out to sea there is a decent chance they won’t come home fully intact.

Gabin’s wife Yvonne is running out of patience with her husband’s chosen career, and the stress it brings to her life. All she wants is for him to quit, so they can retire somewhere warm. On top of that she’s sick, but hasn’t let her husband know the seriousness of her condition.

The early part of the film involves a particularly onerous and unpleasant rescue mission, for an extremely ungrateful and irritating captain. One that includes André meeting Catherine, the abused wife of the awful captain, and helping her escape him.

The movie has a lot to say about the nature of marriage, love, and the hard work required to sustain it. André pursues the affair because Catherine seems simple to him, “like a child.” His real life is hard. His work is dangerous, his company doesn’t respect him, and his marriage isn’t what it used to be.

That last part is the most significant detail. His wife is a real person to him. She has issues and opinions and wants things from him that he’s conflicted about. Catherine doesn’t have any of that. She’s not simple perhaps, but the situation is.

It’s also doomed, of course, this is that kind of movie. But even if it wasn’t, he would eventually end up in the same situation with Catherine he’s already in with Yvonne. She would stop being an escape and become a person, and have opinions, and want things of her own.

The issue is him, and he can’t run away from that quite so easily.

Or at least that's what I found. Like I said, I’m not sure if that’s the point the film wants to make. This is a melancholy affair, and the ending makes it seem like maybe it’s just about the inevitability of sorrow, and the hardship of life.

Something like a French Brief Encounter. If that was the intention then I would call this film a failure. The illicit romance never clicks enough to care that it's ending.

On the other hand, maybe I'm right, and it's deeper than that. Either way, at least I found something interesting to think about. - Jan 13th, 2020