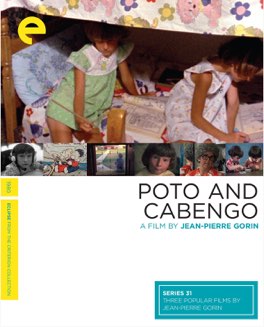 I like the style of these Gorin films, but the subject matter here was too close to home, and so depressing. Instead of the whimsical journey he wanted, he found child abuse.

My wife grew up in Germany, and, as such, German is her native language. Her father is Turkish, so she also understands some of that, and she went to college in The Netherlands so she speaks Dutch too. And she has lived here for more than a decade, and therefore speaks English as well.

Still, German is her mother tongue, and is the language she uses when she talks to our infant son. It’s important to her that he knows German. So that he can talk to his family in Germany, but also so she can use it to talk with him. As Nelson Mandela said “If you talk to a man in a language he understands, that goes to his head. If you talk to him in his language, that goes to his heart.”

I also speak German, having learned it so that I could speak with her family as well. But it will never be my primary language. I speak to my son in a mixture of two languages. English, which is my primary language, and Hebrew, which was my first language. Only time will tell how confusing he finds that, or what sticks, or which of these languages speaks to his heart.

All of that is to say, that I found this documentary about two little girls from a mixed English/German-speaking family, deeply upsetting. Criterion describes the film as “delightful” and I cannot disagree more. It’s a good documentary, but it was not delightful.

Ultimately, this film is about children who are so neglected by their parents that it essentially creates mental disability. They speak to each other in a creole of English and German, mixed up by limited experience. They are years behind their age, and have remained so their entire lives. The total lack of interest shown to them by their parents, and the complete failure of the society around them to take them away from their parents, took two lovely kids and disadvantaged them irrecoverably. What’s delightful about that?

As the parent of an infant, one with all the promise in the world stretching out in front of him, I cannot fathom how anyone could treat their children this way. With disinterest. To just have no desire to speak with your child, to show them things, to teach them, to learn from them. I just can’t understand it, and it was so hard to watch it play out. - Aug 1st, 2020