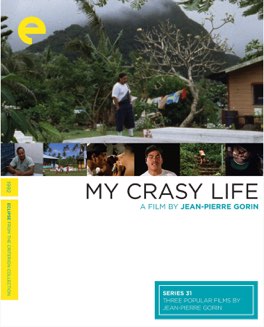 This is a fascinating film in the same way that a car accident is fascinating. It’s impossible to look away from, but in a morbid and tragic way.

This is a portrait of members of the Sons of Samoa, a gang based in Long Beach that is associated with the larger Crips family. It shows the daily camaraderie of these gang members, as well as a local Samoan cop who patrols the beat where they live. The film lets the gang members interview each other, and adds very little authorial voice on top. Very little for a Gorin film anyway.

There are moments when it seems like these gangbanging kids are about to realize how pointless their violence is. It’s in the sequences where one of the gang members is interviewing some of the others, and asking surprisingly pointed questions about their behavior. He leads them right to the edge of understanding, asking them what they would do if the violence they are committing leads to violence being done to their own innocent families.

These guys, kids basically, some as young as 15, ponder the question. It really seems like they are about to see the effects the cycle of violence is having on their community. Then they explain that while they would be broken inside, they would make sure to commit even more heinous acts of violence as revenge.

It’s absolutely startling. I am not unsympathetic to the general idea of gangs. Like Tupac said, gangs can be a positive force. Ultimately a gang is just a means of belonging, and a method of societal protection. The police are a gang. A particularly violent one at that. The government are a gang. All societies are, in some fashion, organized into gangs.

Where gangs go wrong is when they become both a vehicle for violence and an almost guaranteed means of self-destruction. None of these guys has a future. They are all any given bad day away from incarceration or the morgue. They are the victims of poverty and institutional injustice. Of colonialism and capitalism and racism. They don’t have the educational opportunities, or the economic opportunities, that would let them avoid this fate.

At the same time, they have internalized all of it into a toxic worldview, one that hurts as many people as it supports. It’s a tragedy in motion, made all the more tragic by the real bonds of love that clearly bind them together. - Aug 29th, 2020