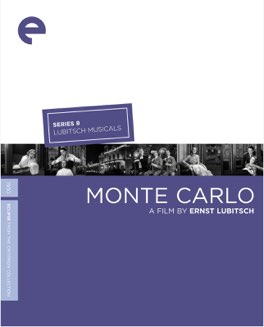 Wow did I not like this. It’s boring, the songs are unremarkable, the main male lead is contemptible, and the message is appalling. So, yeah, not for me.

I contend, that a musical romantic comedy should, at a minimum, either have a good romantic story, be funny, or have memorable songs. Ideally you want all three, but a combination of two, or even just one, will do in a pinch. This film has none of those things. What’s left are a couple nice moments, a nice performance by Jeanette MacDonald, and a lot of missed opportunity.

The film follows a countess, played by Ms. MacDonald, who runs away from her fiancé on her wedding day. On a lark she heads to Monte Carlo, to try and get rich at the casino. She immediately loses all her money, but somehow manages to keep living in high style, with servants and an entire floor of a hotel. She also attracts the attention of a womanizing count, who decides to pretend to be her hairdresser in order to get close to her. Eventually they fall in love, but cannot be married because of the difference in their stations. Hijinks ensue, she finds out he’s actually a count, all is right in the world.

I suppose I have two main issues with this film. The first is that Jack Buchanan, who plays the count, is an absolute creep with zero redeeming qualities. The entire film is him lying to this woman, so he can touch her hair and try to trick her into being with him. He learns zero lessons along the way, never feels or shows any remorse for lying and creeping, and gets exactly what he wants. In fact, the film makes her seem like the bad one for not just going along with whatever he says. It’s absolutely awful.

The second thing is that the main message of the film is that marriage is only possible between people of equal social classes. That’s a terrible message. It’s stated matter-of-factly and mostly unexamined in the film. The film does vaguely try to suggest that only loving people of your own station is wrong, with a play-within-a-play mechanic, but then immediately undercuts that message by having the countess get her count in the end.