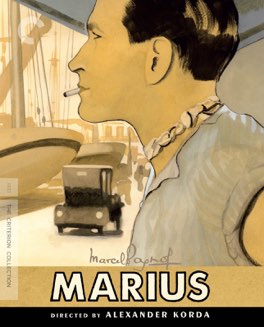 They say, if you love someone set them free. But, of course, if they love you too then they already are.

There’s a real tension that can exist between a desire to stay where you are and a desire to go someplace new. Especially when everything inside you is telling you to go, except that you love someone who needs you to stay. I can very much relate to that tension. In the end, I made the opposite choice that Marius makes in this film, but the tension was real, and watching this film made me feel it all over again.

This is the story of a young man, the titular Marius, and a young woman, Fanny, who are both living by the old port of Marseille. I’m going to mostly spoil the plot, but on the other hand Criterion does too, in their description for the film! Honestly, it’s not that big of a deal, the genius of this film isn’t the exact details of the plot. Instead it’s the relationships and how real they feel.

Marius and Fanny love each other. But Marius has another love. He loves the sea. He is compelled to leave his home, and his family, and journey the world. He temporarily sticks around, because of his love for Fanny, but she’s convinced that he won’t ever really be happy if he stays just for her. So she sets things in motion to test that theory, and is proven completely right when he makes the choice to leave.

In my case, I didn’t grow up feet from the docks, longing to leave the only world I know behind and head out to sea. Although, I have certainly daydreamed about becoming a sailor and exploring the world. Honestly, if there were still ships like the one Marius gets on, I might have done it. Modern commercial shipping isn’t quite so romantic as back in the good old days.

No, in my case it was that I was tired of living in the city I was living in. I’d been tired for a while, and I was just about ready to leave. And, of course, that’s right when my now-wife decided she liked me too and wanted to date me. After me trying to convince her that she did for the previous five years. I was ready to go, she very much wasn’t. I had a choice to make.

I chose to stay and I don’t regret that choice at all. It was a hard choice at the time though, and it came with real feelings. I stayed for her. She was still in love with the place, and being with her brought back some of my love for it too, at least for a while. It dulled the pain considerably. I think that’s part of what Fanny means when she tells Marius that her love will cure him of his need to wander.

But of course, it doesn’t work quite like that. He loved her, but not enough. And in the end, he loved the idea of adventure, the idea of leaving, more. She let him off the hook, sure, but his heart was mostly gone anyway. If his love for her had been real enough, he would have stayed. - Sep 12th, 2020