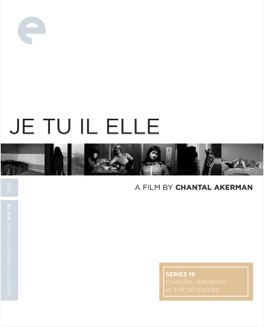 Another total success for me. I just really get a lot out of these films. This one is also beautiful, which certainly doesn’t hurt.

I’m falling hard for the films of Chantal Akerman. There’s something so delightfully maddening in her use of time, so slow and deliberate. She lets scenes simply play, for as long as they can go. It’s not a technique that always elicits a positive response, but in her work it absolutely does.

This is the most narrative of this set so far. It tells a three act story of a young woman, played by Akerman herself. The woman is clearly in the middle of something like a psychotic break. The first third of the film she spends entirely in her bedroom, eating nothing but sugar, re-arranging the furniture. In the middle third she ventures out into the world, hitchhiking with a passing truck driver. The final third features her visiting the apartment of a recently former love.

It’s a sparse story, with little dialogue, and I found it absolutely compelling.

I can relate to her sense of alienation, and her separation from the things happening around her. In a sense she’s merely a lens, watching the world, and reacting to it. She’s mostly a passive participant in her own life. Even at the end, when she finds some agency, it’s in a losing cause. She is reconnecting with her ex and it’s very clear that this will not be the start of anything new.

I don’t know why I identify so strongly with this kind of disconnected person. It certainly doesn’t map to my life in any obvious way. And yet, in these films, and in the films of Bergman and Antonioni, I am so strongly connected to this kind of spiritual and temporal ennui. I think in some previous life I must have been an existentialist philosopher. Or a non-racist version of the main character from The Stranger. In my real, actual life, I’m surrounded by people and love. And yet, in my brain I’m some kind of distant disaffected loner.