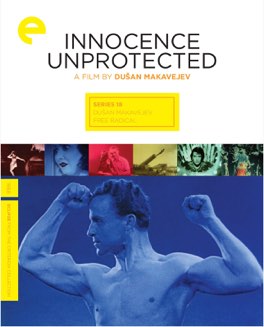 As is often the case with allegorical film, I have no idea what this is actually trying to say. But who doesn’t like a strong man saving the world one daring feat of acrobatics at a time!

I imagine this came as something of a shock to Yugoslavian audiences when it premiered in 1968. The footage at its core is from 1941’s film of the same name, and was the first sound feature made in Serbia. It was created during the German occupation of Belgrade, secretly and without permission, and it was therefore not possible to screen it. By the time the war ended, the authorities assumed that its director, Dragoljub Aleksić, must have been a collaborator, because otherwise how could this film possibly exist? Eventually he was cleared of suspicion, but the film remained mostly unseen.

Because of all that history, the original film was something of a whispered myth. The story of its creation was infamous, but the film was unavailable. When Makavejev decided to take the original footage and build this new film around it, they finally got a chance to see it.

Honestly, the original film isn’t really all that great. I find the back story far more interesting than the film itself. Makavejev takes this almost-legend and builds it out into an interesting mixture of documentary and meditation. He intercuts the original film, with then-modern interviews of the original people involved in its making. In doing so, he provides a ton of context into what life was like in Belgrade, in 1941. It’s a fascinating look back into that history.

Of course, this being Makavejev, he also includes all of his own weird filmmaking things, and this is where I get lost. There’s clearly some deeper meaning here, perhaps around nationality, or communism, or society in general, but it’s way over my head. I don’t know enough to even think about doing the kind of work it would take to get it. - Sep 26th, 2020